The miracle of a museum 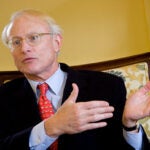 As the national center of African-American history finally opens, a key backer explains how a century-old dream came true

It took a full century for the early dream of a National Museum of African American History & Culture on the National Mall in Washington, D.C., to become a 400,000-square-foot entrenched edifice of glass, aluminum, and concrete.

The vision began in 1916 when African-American civic leaders called for a memorial to the black soldiers and sailors who battled in the Union Army during the Civil War to end slavery and preserve the United States. Their original proposal, which later was broadened to recognize the achievements and contributions of all African-Americans, met with strong early opposition, which lasted through the Jim Crow era, the Great Depression, two World Wars, the Civil Rights Movement, and even into the 1990s.

Yet the long struggle will culminate on Sept. 24 when the Smithsonian Institution opens the new museum near the Washington Monument. President Obama, the nation’s first African-American leader, and first lady Michelle Obama will attend.

It’s a long and twisting story that Robert L. Wilkins, a U.S. circuit court judge, knows well. A 1989 graduate of Harvard Law School, Wilkins has written a book, “Long Road to Hard Truth,” in which he chronicles the efforts to build the museum. He will discuss his book during an open talk on Sept. 19 from noon to 1 p.m. at Wasserstein Hall, Room 2036AB.

“It’s a miracle,” said Wilkins by phone from his Washington office. “It’s surreal to see it happening. This was so long in the making.”

Wilkins said he became involved in the project in 1996 by “happenstance.” He attended a wake of a fellow churchgoer, and was struck by the stories that the congregants shared after the service about life experiences, from growing up in the segregated South to marching during the Civil Rights Movement.

“I couldn’t stop thinking,” recalled Wilkins. “Why don’t we have a museum to share all these stories? I became obsessed.”

So much so that Wilkins formed a nonprofit to advocate for a museum and quit his job as an attorney to devote all his time to the project. He joined forces with leading Civil Rights leader and U.S. Rep. John Lewis of Georgia, who since 1988 had introduced several bills to create a museum honoring African-American history, to no avail. With other prominent African-American leaders, they worked to build bipartisan support in Congress to overcome opposition to the museum. Republican Sen. Jesse Helms of North Carolina was among the strongest opponents.

“Some people were unwilling to recognize the sacrifices and contributions of African-Americans to the United States and that African-American history was worthy of being celebrated, memorialized, and documented,” Wilkins said.

But the patient, continuing efforts to reach across the aisle paid off. The work of Wilkins, Lewis, and other African-American civic leaders helped form a coalition of Republican and Democrat politicians, which proved crucial to passing the bill to create the museum within the Smithsonian. In 2001, Wilkins served on the presidential commission that planned the museum, and two years later President George W. Bush signed the bill into law.

“There were bumps and setbacks,” Wilkins said. “I had doubts, but what kept me going was John Lewis. He inspires you to keep the faith.”

Even after the bill became law, some critics argued against the museum’s location on the National Mall. That the museum was built on that prominent site embodied powerful symbolism for African-Americans, said Wilkins.

“For most of our history, African-Americans were not seen or heard,” said Wilkins. “They had to enter through the back door, never through the front door. The National Mall is the front lawn of the country, and we felt that the museum deserved a central, prominent location.”

As for whether the museum, which opens at a time of renewed national racial tension, might help the United States confront its long legacy of slavery and discrimination, Wilkins said he is hopeful.

“It’s not a panacea, but it’s a way to bring the country closer together,” he said. “I hope that people will come away with a new understanding of the sacrifices and battles that African-Americans went through, and an appreciation of the progress we have achieved.”

The new museum, Wilkins said, will also help people understand the central role African-Americans played in American history even before the nation’s founding, as well as at key historical moments such as the writing of the Constitution, with its compromises around slavery, and the Civil War, when the “peculiar institution” brought the republic to the brink of secession.

“African-American history is part of everyone’s history in this country, and it’s an integral part of what it means to be American,” he said. “The point simply is that this is not a museum that tells the story of a particular group of people, it’s more than that. It’s the story that helps us understand the story of the United States even more clearly.”