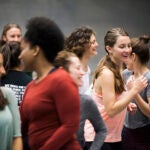 Shop till you drop — or add

Helping researchers at home and around the world

In the past few years, more than 13,000 Harvard faculty, students, and staff, individually or in groups, have created more than 6,500 websites on Harvard’s OpenScholar platform, a free, open-source software project based on technology invented and developed at Harvard’s Institute for Quantitative Social Science (IQSS).

Now available to the Harvard community through a hosted service run in collaboration with Harvard University Information Technology (HUIT) and Harvard Public Affairs and Communications (HPAC), OpenScholar distributes a considerable volume of information by and about Harvard scholars, departments, centers, and projects. It provides the first coherent online presentation of the Harvard brand, empowers individual scholars to create excellent websites, and has saved the University more than $100 million in external Web development fees.

It started with faculty websites.

“We conceived of OpenScholar because of an opportunity we noticed at IQSS,” said Gary King, the Albert J. Weatherhead III University Professor and director of IQSS, “but we tried to write the software-based solution sufficiently generally so that the entire University, and indeed other universities, could benefit.”

King said IQSS’s affiliates and leaders of the institute’s centers, programs, and projects routinely asked IQSS to pay their substantial Web development costs. “We then studied these sites and realized that pretty much all scholar Web sites” — 99 percent — “are structurally identical. Every one has lists of courses, publications, CVs, contact information, and many other common features, even though the design of each is often unique.”

In response, IQSS invented a single software installation, with the information in all scholar websites represented in one database. OpenScholar lets each scholar choose his or her own URL, graphic design, and look and feel, and massively reduces the costs of running the site.

The software is free for anyone at Harvard. It is self-service, and does not require any programming knowledge.

As an alternative, users can seek expert help from Harvard Web Publishing, the University’s in-house Web publishing group, which will help build a site at rates well below those of outside vendors. HWP also offers product support and training.

Based on social science research

OpenScholar helps scholars disseminate, promote, and make the knowledge created at Harvard more accessible to others. OpenScholar’s approach is closely tailored to the needs of academia, so the result is far more impactful than sites designed with general-purpose website builder tools.

The system was also designed to include incentives. For example, OpenScholar automatically and instantly pushes its publications to indexing services such as Google Scholar, DASH, RePEc, and the Web of Science, to increase the Web visibility and even academic citation counts of works on its sites. All project metrics are public and change in real time. Harvard scholars have responded by posting on their websites more than 72,000 publications and more than 300,000 associated files.

OpenScholar also lets faculty choose individualized presentation and unique branding. Its sites are “totally customizable,” said Bilsi Balakrishnan, the software development lead for the project. From URL to theming to whether to include a Twitter feed, each site can look and feel like no other.

OpenScholar was designed to help leverage Harvard’s internal store of “big data.” Quantitative social scientists such as the researchers at IQSS are playing a critical role in developing methods to make sense of staggering quantities of data — all toward the goal solving the challenges that plague society. OpenScholar applied these same principles to Harvard. It also comprises a centralized database of information about Harvard’s scholars, labs, centers, and departments, compiled in a structured format that can be shared, quantified, and analyzed. OpenScholar gives the University access to massive and growing quantities of information about itself in a systematized and actionable format. It also has better information than ever before —hundreds of millions of Web clicks and other online behavior, and real-time information about trending interests, discoveries, and concerns — about what about Harvard interests the outside world.

Working together to help Harvard

Now celebrating its sixth year, OpenScholar continues to enjoy and grapple with the challenges of ever-increasing adoption. “If anything goes down, even in the middle of the night, we’re there,” said Balakrishnan. Making a system that can cope with that kind of demand, and grow with users’ changing needs, is both challenging and rewarding. “Our traffic has doubled in the last year alone,” she said.

Growth is being driven in part by the team’s continued commitment to improving the product. Balakrishnan said her group is in the process of overhauling the administrative interface to improve the user experience. “We want users to be able to manage their sites even more easily.”

OpenScholar increasingly is becoming the go-to source for academic sites not only at Harvard, but beyond, with installations at institutions such as Princeton University, the University of Pennsylvania, the Hebrew University of Jerusalem, and many others, As King noted, “Harvard is in the business of creating, preserving, and distributing knowledge. We made OpenScholar open-source so other universities could benefit as well.”

Most recently, OpenScholar has streamlined the process of obtaining an academic website for thousands of scholars, making global interconnectivity immediate and significantly less expensive.

“Part of the University’s mission is getting the knowledge created here out there,” said IQSS Executive Director Cris Rothfuss. “That’s what OpenScholar does.”