In lives of others, a compass for his own 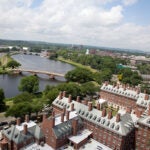 It took Pedro Spivakovsky-Gonzalez several years and nearly 10,000 miles, on a journey that included several cities around the world, to find his calling in his hometown.

The son of a political refugee from the former Soviet Union, Spivakovsky-Gonzalez, J.D. ’17, was born in Boston and grew up in Spain, Canada, and the United States. He studied economics at the University of California at Berkeley, completed a master’s in development studies at the University of Cambridge in England, and went to work as a research economist in Washington, D.C.

It was after his stints in Cambridge and Washington that he experienced “the dissonance” of studying poverty and inequality in wealthy institutions, and the limits to making a direct impact on people’s lives as a researcher.

Yearning for a career that resolved that discord, he applied to Harvard Law School. When he was accepted, it felt like a homecoming of sorts. The first house he lived in was three blocks from the Law School.

But the real epiphany came while working at the Harvard Legal Aid Bureau, one of the School’s clinical programs and the oldest student-run organization in the United States. The bureau provides free civil legal services to people who cannot afford an attorney. It was there that he found his passion.

“We help people who are often forgotten and live different lives from what we often see either in Washington, D.C., or the Law School,” said Spivakovsky-Gonzalez on a recent morning near Harvard Yard.

Entering his second semester as the bureau’s president, he plans to become a public-interest lawyer. As a student attorney with the bureau, he has represented East Boston residents facing eviction in Boston Housing Court, and helped veterans apply for benefits at the Legal Services Center in Jamaica Plain. Both experiences left deep marks on him.

“Before, I felt a little bit removed from a lot of the populations that are most affected by the decisions and policies that are made in Washington,” he said. “Here, I can help people more directly.”

Case in point: In August 2015, Spivakovsky-Gonzalez represented tenants of a four-unit apartment building on Bennington Street in East Boston, who were being forced to either pay twice their past rent or lose their homes. With his legal advice and representation and that of three other students, the cases were settled in favor of the tenants, who stayed put.

“Many people are unaware of the law,” he said. “They think they don’t have legal rights but in fact under the law they have rights and leverage to improve their situation.”

Spivakovsky-Gonzalez kept his poise throughout the trial, said instructor Eloise Lawrence, who supervised the students.

“He was the picture of grace under pressure,” said Lawrence. “For example, he kept  his composure even when he was conducting a direct examination and the interpreter was incorrectly translating the witness’s testimony — which Pedro knew because he is fluent in Spanish — and the judge was berating him for raising his concerns. When the verdict came down in our client’s favor, he would not let any of us smile at counsel table for fear of appearing  that we were gloating.  He’s the opposite of today’s professional athlete who does a victory dance at a mere good play.”

As the bureau’s leader, Spivakovsky-Gonzalez has to uphold its dual mission of providing civic legal aid to low-income residents in the Greater Boston area while giving students a chance to practice housing, family, benefits, and wage and hour law. Students practice under Massachusetts Supreme Judicial Court Rule 3:03, which allows them to offer legal assistance under the supervision of clinical instructors who are working attorneys.

The bureau’s assistance has proved crucial, said Andres Del Castillo, an organizer with City Life/Vida Urbana, who led a recent meeting in the basement of a church near the Maverick T station. About 30 people were on hand to ask for assistance with problems such as eviction, sudden rent increases, and cockroach infestation.

“We have very limited resources,” said Del Castillo. “It’s a miracle what happens here. The law students do their best to help people in the community.”

This summer, as well as attending community meetings in East Boston, Spivakovsky-Gonzalez worked with veterans in Jamaica Plain. Both experiences helped him recognize that public-interest law is his calling, and that giving back to the community is a way to honor his own history. His parents came to the United States after living in dictatorships in their home countries.

“It’s hard to know where one will end up,” he said of his return to Boston. “But it’s nice to be back to the place where I’m originally from to work in public-interest law and give help to people who need it.”