From leaf to itch 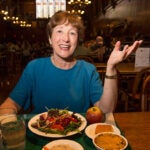 For freshmen, food for thought

Researchers from Harvard Medical School and Boston Children’s Hospital are among the first to trace poison ivy’s molecular path, following the effect from leaf to burning itch and pointing a potentially soothing way forward.

Investigators led by Assistant Professor of Microbiology and Immunobiology Florian Winau were able to do what previous teams hadn’t managed: illuminate the role of a key molecule called CD1a in a chain reaction that begins when the shiny leaf touches the skin. Until now, that molecule’s role lay in a scientific blind spot created because ordinary lab mice — crucial to immunology study — don’t produce CD1a.

The findings, published last month in Nature Immunology, took advantage of mice engineered to produce the molecule by colleagues at Kyoto University, which enabled observation of the entire inflammatory pathway for the first time.

According to the American Skin Association, 50 million Americans a year suffer the bumpy, itchy rash that results from contact with poison ivy, poison oak, or poison sumac, whose effects come from the same compound, called urushiol, in the plant sap.

“Whenever we talk about the project, we get a really nice response,” said Winau, who has never had poison ivy. “People have a … very close connection to this [and say], ‘I had it bad and it’s horrible!’”

The work also identified an antibody that interrupted the inflammatory response and that could be used as an injectable drug, Winau said. Another possibility is the development of a small molecule to be administered in a topical cream.

Psoriasis sufferers could benefit from the findings, as the newly outlined inflammatory process has elements similar to those found in the skin disease, which afflicts 7.5 million Americans and an estimated 125 million worldwide, according to the National Psoriasis Foundation.

Winau has been studying CD1 molecules for a decade. CD1 is expressed by Langerhans cells, which are found in the skin and act as an early warning system for the body’s immune defenders. When the Langerhans cells come across a foreign invader, they engulf the invader and present part of it — called an antigen — on a CD1 molecule on the cell surface. Immune cells then recognize the invader and target their attack.

The study began when Winau was reading about the structure of lipid antigens — which include urushiol — and came across urushiol’s chemical structure. It looked to Winau as if it might bind to a key location on the CD1a molecule. Such a scenario meant CD1a was likely involved in the reaction triggered by urushiol. Winau decided to investigate, using the engineered mice and the crystallography expertise of his Australian colleagues to identify and verify a complex process.

When urushiol comes into contact with Langerhans cells in the skin, the Langerhans cells load urushiol on CD1a molecules that activate the immune system’s T cells. The T cells produce interleukin 17 and interleukin 22, which cause inflammation and itchiness. It was these two interleukins, known to be active in psoriasis as well, that prompted Winau to suggest that a similar mechanism — and a similar therapeutic target — may be involved in both the poison ivy response and in psoriasis’ auto-immune reaction.

Researchers eased the rash experimentally by using an antibody that interfered with communication between the CD1a molecule and T cells.

Winau is now exploring the potential to translate the findings to the consumer market, as well as examining possibly implications for other parts of the body.