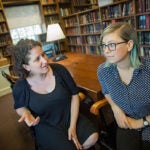 The sacred in Harry Potter

When Colson Whitehead ’91 first came to Harvard, he wanted to write novels about vampires and werewolves.

Twenty-five years later, with several books behind him and MacArthur and Guggenheim fellowships under his belt, his latest work, “The Underground Railroad,” has become a sensation, winning raves from Oprah Winfrey and many others as well as a National Book Award nomination. The novel tells the story of Cora, a slave in a Georgia plantation who becomes a runaway thanks to an actual subterranean train that helps slaves escape to freedom.

The Gazette interviewed Whitehead about his desire to become a writer, his time at Harvard, and the legacy of slavery.

GAZETTE: What did you learn at Harvard that helped you as a fiction writer?

WHITEHEAD: When I got to college I wanted to write a hard novel, a Stephen King-type, with werewolves and vampires. During my first year, I took Robert Brustein’s post-modern drama class and Robert Kiely’s symbolism class, and so I was exposed to a different kind of fiction from what I had been working on. You don’t forget your first exposure to “The Waste Land” or to “Ulysses,” so all of that started me on figuring out different kinds of fiction that I wanted to write.

GAZETTE: What were the origins of your interest in fiction?

WHITEHEAD: I wanted to write fantasy fiction from a very young age. As a kid, I was interested in science fiction and horror and Marvel comics, making up crazy stories. Trying to come up with new adventures for Spider-Man was my junior high activity.

GAZETTE: Did you take any creative writing class at Harvard?

WHITEHEAD: I applied to a creative writing workshop twice and I was turned down both times, which was depressing but also good training for the rejection you get as a writer. So I probably learned more in that way than I would have in the workshop. [Laughs.]

GAZETTE: And now you’re an acclaimed writer. What do you think of those instructors who rejected you? Did they make a mistake?

WHITEHEAD: I’m sure my stories were pretty terrible. I think they were exercising good judgment. [Laughs.]

GAZETTE: What made you stick with it?

WHITEHEAD: I started writing as a journalist when I got out of school for The Village Voice, and there was nothing that really gave me as much pleasure as writing. I wrote my first novel and it was rejected, but I stuck with it. I didn’t have a choice but to keep going because basically there is nothing else I can do that would make me sort of feel whole.

GAZETTE: What was Harvard’s main contribution to your writing career?

WHITEHEAD: When you’re a writer you’re independent; you have to get your inspiration and influences from a lot of different places. At Harvard, I did a lot of grazing. I took courses in the Department of African and African American Studies, and also some theater classes — I read plays. I felt I was able to make my own secret curriculum as a writer in training. Harvard allowed me to do that with the insane variety of bright people who pass through there.

GAZETTE: You’ve said one of the books that inspired you to write “The Underground Railroad” was Harriet Jacobs’ “Incidents in the Life of a Slave Girl.” When did you read Jacobs’ book?

WHITEHEAD: In my junior year at Harvard, in my “Introduction to African-American Literature” class, we read some of the big slave narratives. In “Incidents in the Life of a Slave Girl,” Harriet Jacobs talks about what it took to get her to flee the plantation. She hid for seven years in an attic waiting for passage out of North Carolina, and that became the inspiration for the North Carolina chapter in my book.

GAZETTE: You have said you first had the idea for the book many years ago. Why did it take you so long to write it?

WHITEHEAD: I would come to the idea every couple of years and didn’t feel ready, either emotionally or in terms of being able to grapple with the huge and harrowing subject of slavery. The protagonist evolved over time. I think that becoming a parent and having kids and becoming more mature in general allowed me to have a different perspective than I would have had when I was 30.

GAZETTE: Is it particularly challenging for African-American writers to write about slavery?

WHITEHEAD: I think the challenges are the same as you write about anything. If you write about gardening, World War II, or slavery, how can you bring a fresh perspective to the subject? So the challenge was to start something, figuring out what I can bring to this particular story that no one else can.

GAZETTE: Your book comes at a time of growing racial conflict in the nation. How do you think it speaks to this contemporary tension?

WHITEHEAD: I can’t say how people would respond to it. I think the various forms of institutional racism that create the violent rhetoric of a Trump campaign, and which create a system of rampant police brutality, were seeded hundreds of years ago, and so part of what the book does is portray the indomitability of a certain strand of racism. Hundreds of years have passed since the end of slavery but certain strands of racism still remain in force.

GAZETTE: The scenes of cruelty and brutality against slaves in your book are very powerful. What went through your mind while writing those scenes?

WHITEHEAD: It was painful. It’s hard for someone like me born in the 1960s to imagine the daily brutality of the plantation.

GAZETTE: How important is it for a writer to create distance between himself and the material he’s creating?

WHITEHEAD: We have to. The material is something you’re actively creating. What you put in, what you take out, what you exacerbate, what you underscore, those are decisions you make to create some distance. You’re simultaneously engaged with the characters and disengaged from them in order to get the work done.

GAZETTE: Do you think the nation as a whole has confronted the legacy of slavery?

WHITEHEAD: I’d say no. People don’t want to think about things that make them feel uncomfortable.

GAZETTE: You deliver a horrific portrayal of slavery, but the book ends on a hopeful note. What hopes do you have for the country to heal the scars of slavery?

WHITEHEAD: I really don’t have any hopes. We’re pretty slow to learn. I think things improve by degrees. I have it better than my grandparents. My parents worked to make things better for me and hopefully my children will have it better than I do. And surely we can’t say that nothing has improved, but there is also obviously more work to be done.