The high price of workplace stress 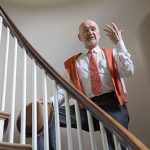 Eternal light, up for grabs

‘Creating a culture of health’ goes beyond insurance, sick days

Sick and tired of your job? You’re not alone. Nearly half (44 percent) of working adults say that their current job affects their overall health, but only 28 percent of those believe that effect is a good one. People with disabilities, in dangerous or low-paying jobs, and those in retail are most likely to say their job has a negative impact on their stress levels (43 percent), eating habits (28 percent), sleeping patterns (27 percent) and weight (22 percent), according to a new survey from the Harvard T.H. Chan School of Public Health in collaboration with National Public Radio and the Robert Wood Johnson Foundation.

There is some good news: Most think work has a positive impact on personal health, but “in almost every case, the negative is significantly greater than the positive,” said the poll’s director, Robert J. Blendon, Richard L. Menschel Professor of Health Policy and Political Analysis at the Harvard Chan School during a panel Monday to discuss the findings.

“People see their jobs as stress-creating,” and employers simply aren’t doing enough to help, he said. “It’s important to realize almost half of people who work are at a workplace that has no workplace health program.”

Most U.S. companies have long viewed their responsibility to employee health and well-being at arm’s length, as an act of largesse that often begins and ends with perquisites like medical insurance, a few paid sick days, or maybe discounts on gym memberships. But data show that 36 percent of workers suffer from work-related stress that costs U.S. businesses $30 billion a year in lost workdays. Experts say many of these health problems can be corrected if companies adopt a much more significant role creating a “culture of health” in the workplace where workers feel empowered to pursue living a healthier life, not just providing access to after-work yoga classes or fruit in the break room.

Stressful situations like caring for a sick family member while working full-time, working overtime or shift work that disrupts sleep habits, trying to make ends meet at a low-wage job, or going home each night to an unsafe community also contribute substantially to poor worker health, said Marjorie Paloma, director of the Robert Wood Johnson Foundation. “Far more of what shapes health happens outside the health care system and also outside of encouraging healthy behaviors,” so employers need to help improve conditions that affect worker health off the job, too. “It’s up to all of us to make healthy choices but the choices we make are really as good as the choices we have.”

The survey also delineates the extent to which mental health issues affect worker health. Nearly one in 17 people suffer from a serious mental condition; of those, between 5 and 6 percent have significant problems that pose a risk to fellow workers, their families, and companies, a fact that is likely underreported because workers either don’t have access to mental health resources or fear seeking help, said John Quelch, professor of business administration at Harvard Business School, and professor in the Harvard Chan School’s department of health policy and management, who recently did a case study on mental health in the U.S. workplace.

Even when resources like employee assistance programs do exist, many workers will not use them because of the stigma associated with mental health and the fear that using such services will somehow get back to their employer and undermine their standing at work. “They may be passed over for a job, they may not get a raise, they may be the first person out the door when the company has to cut the workforce,” Quelch said.

In addition to stress, direct and indirect exposure to on-the-job hazards and conditions, things like contaminants, accidents, injury, and poor air quality are major sources of risk for chronic disease. In 2014, there were more than 4,800 occupational fatalities and more than 3 million work-related injuries and accidents at a cost of $50 billion, said Glorian Sorensen, professor of social and behavioral sciences at Harvard Chan and director of the Center for Community-Based Research at the Dana-Farber Cancer Institute.

So what can and should employers do?

Since stressors vary by profession, employers can start by talking to workers about the specific conditions that drive stress in a particular job, things like a harmful or unsafe workplace, understaffing, variable hours, overwork or expanded responsibilities due to downsizing, inadequate or failing equipment or materials, and a lack of regular and clear supervisor feedback.

“It isn’t all … ‘if we only go to the gym and have an apple every day, this will all go away,’” said Blendon.

Paloma agreed. “If it’s not a part of the culture of the company, if it’s a one-off thing, then research has shown that does not work,” she said. Companies need to take a more holistic approach to worker health, one that extends beyond 9 to 5. “If we’re really going to have impact, if we’re going to care about our employees — their health and well-being — and [the] productivity of our country, of the world, we’ve got to be investing in the communities and meeting the health needs of the communities that we live in.”

Health in the American Workplace

Experts take on the concerns most expressed by American employees in a poll conducted by NPR, the Robert Wood Johnson Foundation, and Harvard T.H. Chan School of Public Health.