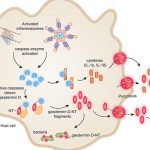 It could act like a pacemaker, monitoring and responding to heart problems more quickly

Scientists and doctors in recent decades have made vast leaps in the treatment of cardiac problems, particularly since the development in recent years of “cardiac patches,” swaths of engineered tissue that can replace heart muscle damaged during a heart attack.

Through the work of Charles Lieber and others, the next leap may be in sight.

The Mark Hyman Jr. Professor of Chemistry and chair of the Department of Chemistry and Chemical Biology, Lieber, postdoctoral fellow Xiaochuan Dai, and other co-authors conducted a study that shows the construction of nanoscale electronic scaffolds that can be seeded with cardiac cells to produce a bionic cardiac patch. The study is described in a June 27 paper published in Nature Nanotechnology.

“I think one of the biggest impacts would ultimately be in the area that involves replaced or damaged cardiac tissue with pre-formed tissue patches,” Lieber said. “Rather than simply implanting an engineered patch built on a passive scaffold, our works suggests it will be possible to surgically implant an innervated patch that would now be able to monitor and subtly adjust its performance.”

Once implanted, Lieber said, the bionic patch could act similarly to a pacemaker, delivering electrical shocks to correct arrhythmia. But the possibilities don’t end there.

“In this study, we’ve shown we can change the frequency and direction of signal propagation,” he continued. “We believe it could be very important for controlling arrhythmia and other cardiac conditions.”

Unlike traditional pacemakers, Lieber said that because its electronic components are integrated throughout the tissue, the bionic patch can detect arrhythmia far sooner and operate at far lower voltages.

“Even before a person started to go into large-scale arrhythmia that frequently causes irreversible damage or other heart problems, this could detect the early-stage instabilities and intervene sooner,” he said. “It can also continuously monitor the feedback from the tissue and actively respond.”

“And a normal pacemaker, because it’s on the surface, has to use relatively high voltages,” Lieber added.

The patch might also find use, Lieber said, as a tool to monitor responses under cardiac drugs, or to help pharmaceutical companies to screen the effectiveness of drugs under development. Likewise, the bionic cardiac patch could also be a unique platform to study the tissue behavior evolving during some developmental processes, such as aging, ischemia, or differentiation of stem cells into mature cardiac cells.

Although the bionic cardiac patch has not yet been implanted in animals, “We are interested in identifying collaborators already investigating cardiac patch implantation to treat myocardial infarction in a rodent model,” he said. “I don’t think it would be difficult to build this into a simpler, easily implantable system.”

In the long term, Lieber believes, the development of nanoscale tissue scaffolds represents a new paradigm for integrating biology with electronics in a virtually seamless way.

Using the injectable electronics technology that he pioneered last year, Lieber even suggested that similar cardiac patches might one day simply be delivered by injection.

“It may actually be that, in the future, this won’t be done with a surgical patch,” he said. “We could simply do a co-injection of cells with the mesh, and it assembles itself inside the body, so it’s less invasive.”