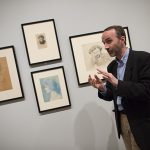 Finding beauty in the bizarre

Jill Lepore, David Woods Kemper ’41 Professor of American History, is enthralled with unusual and fascinating writing projects. Out of teaching “History 97” came Lepore’s search for a 9,000,000-word manifesto written by a bohemian madman who considered himself a historian, an effort resulting in her recent book “Joe Gould’s Teeth.” The prize-winning scholar will join the “Humanities 10” faculty in the fall and teach the ultimate speed history course, a sweep of the United States from 1492 to now, in the spring called “The Great Experiment: A History of the United States.” In a Q&A session, Lepore discussed her work on Gould, who, although he had prominent artistic friends, also had deep racist and anti-Semitic beliefs.

GAZETTE: At first glance, it seems hard not to be drawn to these characters in your new book, especially Gould. How did you get along with him?

LEPORE: He’s unbearable company. That’s what repelled me from the project, frankly. I remember years ago I wrote about Edgar Allan Poe. I was racing to finish it, and I made a bet with one of my kids that he wouldn’t memorize the poem “The Raven” before I could finish my essay. Poe is so damaged, but he’s not evil. I ended up really enjoying Poe because he’s so fascinating in the ways he’s trapped. Gould, from the first day looking at his Harvard undergraduate records, I saw he was terribly ill, and the prospect of spending time with someone who was born in 1899 and was terribly diseased wasn’t enchanting. I thought, “There are a lot of things people think they know about Gould that are completely wrong. What if his ‘Oral History’ isn’t a figment of imagination?” That’s what spurred me on the project. I had to grit my teeth and deal with Gould.

GAZETTE: Was it difficult presenting a history so infused with racism and anti-Semitism?

LEPORE: It’s important to note what that world was. There are two kinds of historians, those who like to read about other historians, and sleuths. I’m both, but I tend to fall into things that are sleuthier. Yeah, there was a lot of eugenics, that’s not a discovery. What was hard about Gould was when he lost control of himself. The venom with which he spoke to people was unhinged, but the form it took was racism and anti-Semitism. Gould’s obsession was with the color line and sex across the color line. He was just spewing raw hatred.

GAZETTE: So many issues in “Joe Gould’s Teeth” — madness, racism, fact, and fiction — seem to connect to the current state of modern American crises: Orlando, the presidential race. Did you know this story would have such relevancy?

LEPORE: This is the piece that resonates with me as a historian. Gould was coming of age in the 1910s and 1920s, when black men were systematically denied the vote and women were fighting for the vote and just getting it. It’s the beginning of the aggrieved white man. You see it historically operating in all kinds of deep ways in that moment in time. Whenever there’s a campaign for political equality, there’s a simmering backlash.

GAZETTE: The theme of fact versus fiction frames the book. What do you make of Joseph Mitchell’s reporting on Gould?

LEPORE: I have an enormous admiration for Mitchell as a writer. Fiction is a way to find the truth. He got himself caught in a trap of his own making. When he started writing, the quirky man on the street was a cute anecdote, and people would elaborate and embellish them. There’s a great argument that the beat newspaper job used to be the training job for the short story writer. He instead moved to The New Yorker and did the same kind of story. The New Yorker [where Lepore is a staff writer] has a fact department, and the fiction is supposed to be fiction. He knew he was getting himself into trouble. He let it be wrong out of compassion. I have a huge amount of compassion for Mitchell. He wanted to write these short stories in a form that was no longer accepting fictionalization. After he published “Joe Gould’s Secret” in ’64, he never wrote again. It wasn’t a willful scam. It was about losing track of where the line is.

GAZETTE: As much as you detested what you learned about Gould, were you surprised at how much you discovered about Augusta Savage, the African-American artist whom Gould obsessed over?

LEPORE: It was redemptive to get out of bed to think about what seemed like an important question: What happened to Augusta Savage? I was so tired of Gould I wanted to throw him out and just write a short book on Savage. Born into poverty to parents who couldn’t read, parents who had been slaves, she fought her way out of that. She did laundry day and night in order to make time to make art, and got punished 1,000 ways. She’s an exact counterpoint to Gould, and he knew that. It was part of his fixation. What he wanted was to become blacker.