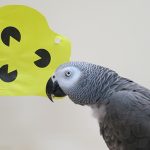 With a distinctive, bony crest that dominates much of its forehead, scientists have long felt that Rusingoryx atopocranion — a distant, extinct relative of the wildebeest — was, to put it mildly, unusual.

But until Assistant Professor of Anthropology Christian Tryon and colleagues, including Haley O’Brien of Ohio University, got their hands on a number of complete Rusingoryx skulls, it wasn’t clear just how strange the animal was.

Despite being separated by more than 100 million years of evolution, tests showed the crest was remarkably similar to the structure of the skulls of “duck-billed” crested hadrosaur dinosaurs. Like hadrosaurs, Rusingoryx likely used it as a resonating chamber to communicate with others or warn of predators. The study is described in a paper published earlier this year in Current Biology.

“Some aspects of the shape of the skull jumped out right away as something that was unusual. As my colleague put it, only a fossil unicorn would have been more surprising,” Tryon said. “Rusingoryx had been described by other researchers in the ’80s, but only from a partial skull missing many of the interesting parts. It turns out that the original skull was incorrectly oriented when described. Until now, that had been the only specimen, so this was not on anybody’s radar.”

What put the animal on Tryon’s radar was the region near Lake Victoria called Bovid Hill.

While working at the fossil-rich site supported by the National Geographic Society, Tryon and others unearthed the first complete Rusingoryx skeletons several years ago. Some sort of catastrophic event seems to have wiped out a herd of these creatures. Evidence at the site suggested that the animals were either driven into a small stream by hunters or were brought down as they tried to cross the water.

Armed with skulls collected from the site, researchers who were part of Tryon’s team in 2012 published a study that completed a taxonomic analysis that showed the animal was a distant relative of the wildebeest and corrected the earlier, incorrect orientation of the skull from earlier studies.

But it wasn’t until a chance encounter with O’Brien — an evolutionary biologist and functional morphologist — that Tryon and others understood how Rusingoryx and dinosaurs might be similar. 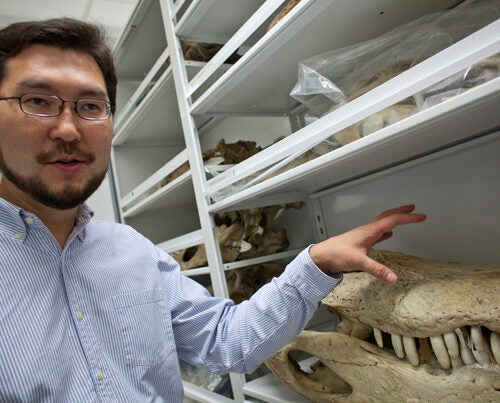 Probing the sparrow’s beastly past

Change in developmental timing was crucial in evolutionary shift from dinosaurs to birds, researchers find

“Haley immediately recognized the similarities with a hadrosaur skull,” Tryon said. “None of us had made that connection until she came on board.”

To get a clearer idea of the function of the bony crest at the front of the animal’s skull, O’Brien used high-resolution CT scans of the skulls to peer into their interior structure.

“We were able to eliminate things like male aggression or heat regulation or moisture retention,” Tryon said. “It was the CT scans that really led us to figure out the function of the crest, because we reconstructed a highly detailed, 3-D model and used bioacoustics models that, in effect, blew air through the skull, and measured how it resonated.” The results suggest very low frequency and perhaps infrasonic sounds that would have traveled across long distances, useful for herd animals that lived in open grasslands like Rusingoryx and many of the hadrosaurs. “It turns out that these trumpeting creatures had a call that overlaps in frequency with the vuvuzela — a herd may have sounded like a South African soccer stadium.”

Aside from an interesting story of convergent evolution across millions of years, Tryon believes Rusingoryx can also serve to provide greater context into one of the most pressing questions in paleoanthropology — what did the world look like as early humans moved out of Africa?

“The Lake Victoria story is important because it’s … pretty clear that the largest lake in Africa was dry for much of the last 100,000 years,” Tryon said. “What that did was create the conditions where we saw a great deal of isolation, diversification, and evolutionary experimentation, and that’s part of why we see these very strange creatures.

“This becomes important in the grand scheme of human evolution because it shows modern humans evolved in some context that was non-modern,” he continued. “Many people had thought that the animals 100,000 to 200,000 years ago were pretty similar to modern fauna, but these sites have shown that isn’t quite true. For me, the big picture this fits into is the question of how we go from point A to point B — how do we go from 200,000 years ago, with one population in one part of the world, to today, with people living everywhere. For me, the trick is to understand the role of ecology in explaining human diversity.”