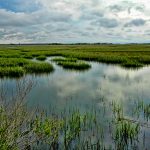 Harvard researchers are front and center in studying planet

We may have glimpsed liquid hydrogen abruptly changing into metallic hydrogen, which is the same stuff in the core of Jupiter. But how and when does this transition from gas to liquid metal occur? How does it behave?

In April of this year, Harvard University researchers in Lyman Laboratory observed evidence of the abrupt transition of hydrogen from liquid insulator to liquid metal. It is one of the first times such a transition has ever been observed in any experiment. They published their research in Physical Review B.
“This is planetary science on the bench,” said Mohamed Zaghoo, the NASA Earth & Space Science Fellow at the Harvard John A. Paulson School of Engineering and Applied Sciences (SEAS). “The question of how hydrogen transitions into a metallic state – whether that is an abrupt transition or not — has huge implications for planetary science. How hydrogen transitions inside Jupiter, for example, says a lot about the evolution, the temperature, and the structure of these gas giants’ interiors.”

In the earthbound experiment, Zaghoo, Ashkan Salamat, and senior author Isaac Silvera, the Thomas D. Cabot Professor of the Natural Sciences, re-created the extreme pressures and temperatures of Jupiter by squeezing a sample of hydrogen between two diamond tips, about 100 microns wide, and firing short bursts of lasers of increasing intensity to raise the temperature. The transition of liquid to metallic hydrogen happens too quickly for human eyes to observe, and the sample lasts only a fraction of a second before it deteriorates. So instead of watching the sample itself for evidence of the transition, the team watched lasers pointed at the sample. When the phase transition occurred, the lasers abruptly reflected.

“At some point, the hydrogen abruptly transitioned from an insulating, transparent state, like glass, to a shiny metallic state that reflected light, like copper, gold, or any other metal,” Zaghoo said. “Because this experiment, unlike shock wave experiments, isn’t destructive, we could run the experiment continuously, doing measurements and monitoring for weeks and months to learn about the transition.”

“This is the simplest and most fundamental atomic system, yet modern theory has large variances in predictions for the transition pressure,” Silvera said. “Our observation serves as a crucial guide to modern theory.”

“A lot of people are talking about the hydrogen economy because hydrogen is combustibly clean, and it’s very abundant,” said Zaghoo. “If you can compress hydrogen into high density, it has a lot of energy compacted into it.”

“As a rocket fuel, metallic hydrogen would revolutionize rocketry as propellant, an order of magnitude more powerful than any known chemical,” said Silvera. “This could cut down the time it takes to get to Mars from nine months to about two months, transforming prospects of human space endeavors.”