The Harvard that was 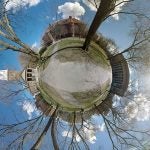 If you asked the religious scholar and former University of Bridgeport President Richard Rubenstein, Th.M. ’55, Ph.D. ’60, one of the things he remembered most about his years at Harvard, he would answer: “Elsie’s Sandwich Shop in the Square, of course.” Rubenstein said Elsie’s, which closed in 1995, made the best sandwiches in Cambridge. “The roast beef was rare, thin, and really piled on. The fact that I remember it after 60 years says something.”

With Harvard’s 365th Commencement just past, alumni from the 1950s through the 2000s were in the mood to share their memories of their alma mater and how it has changed since their crimson days.

A particular memory for Frinde Maher, Radcliffe ’64, is Nov. 22, 1963. From the fourth floor of Widener Library, Maher was looking down on Massachusetts Avenue, and noticed that “something was wrong” in Cambridge. “People were walking around oddly. Their heads were bent, and they were hugging one another. It was strange,” she said.

When she finally left the library, she learned that President John F. Kennedy had been assassinated. “People at Harvard were glued to their TV sets the whole weekend.”

More than 50 years later, Maher, 73, is looking down the same street, this time across from Widener while having lunch at a trendy restaurant.

She remembers the cultural aspects from that time too. “Women were not allowed inside of Lamont,” she said. If a woman then wanted to check out a book, she had to find a man to get it for her. There were other challenges for Radcliffe College students, such as not being able to easily meet with their tutors who lived in the Houses. The dorms housed only men, so access was limited.

Over the next decade, as Harvard and Radcliffe began to merge, women got to use Lamont and moved into the Houses. But the changes, however equitable, also meant that Radcliffe lost its unique identity as a women’s college, which Maher said was partly lamentable.

“The way that Harvard and other male institutions responded to the women’s movement was by, quote-unquote, letting women into their institutions,” said Maher.

Ruth Purtilo, M.T.S. ’75, Ph.D. ’79, was involved in the feminist movement at Harvard during the ’70s, and advocated for equal pay for Harvard faculty and staff. She remembers that she and other female students sometimes blew kazoos during lectures every time a professor said the words “him” or “mankind.”

Enjoying a tea in the Rock Café at the Harvard Divinity School (HDS), the 73-year-old HDS alumna laughed and said, “We were doing some outrageous things. Some of us were very angry. I was probably less angry, though.”

Purtilo also remembered the day she and her dorm mates invited celebrity chef Julia Child to their place for dinner. “She lived two blocks away, and when she said yes, we suddenly asked ourselves, ‘What are we going to feed Julia Child?’” Calling home to collect recipes, Purtilo said they settled on chicken Monterey and Child loved it. Purtilo said her floor also had famed composer and pianist Leonard Bernstein ’39 over for dinner. “It was a time of great informality and meeting interesting people at Harvard,” she said.

Agreeing that his time at Harvard was also marked by informality and interesting people, Alexander Moore ’58 said that some of his most enjoyable undergraduate experiences were dining at Lowell House. Describing the typical meal at Lowell in the 1950s, Moore said, “One grabbed a plastic plate … divided into pie-shaped compartments. Servers scooped out generous helpings and, behold, a complete and generous meal appeared in this triumph of modernist design.”

Moore said that the conversations, especially after dinner, with fellow students and professors were often fascinating. Students discussed classes that excited them, but foreign affairs were another major topic. “Back then we were in the throes of the Cold War, and the Harvard professoriate, with its Russian Studies Center, was right at the center of U.S. strategy,” Moore said.

Moore also remembered a strict dress code: Dining in all the Houses was jacket and tie. Students — himself included — tended to prefer Harris Tweed jackets from the Harvard Coop.

“A jacket and tie were commonplace all around Harvard in the 1950s,” remembers Noam Chomsky, who was not a Harvard undergrad but was a member of the Harvard Society of Fellows from 1951 to 1955. “They used to joke that you can get into the House dining rooms without pants, but you had to have a jacket and tie,” he said from his office at Massachusetts Institute of Technology.

Chomsky said that if he had to define the culture of Harvard in the 1950s in a word, it would be “anglophile.”

“I remember meeting people at Harvard who I thought were English, but who never left the United States,” he said. “Their clothes, accents, and mannerisms were mimicking some version of Oxford or Cambridge high table.”

Chomsky said that social class was a big deal at Harvard during the 1950s. He told a story of a gifted graduate student who came from a lower-middle-class Boston family and spoke with a “lower-class accent.” When he later became a Harvard professor and tried to get tenure, Chomsky said he couldn’t get a recommendation from the faculty. “Class distinctions were rigid back then, but that is thankfully all gone today,” he said.

Over pizza at a Harvard Square hangout, Ayodeji Ogunnaike ’10, Ph.D. candidate and senior tutor of Pforzheimer House, said he has seen significant changes at Harvard over the past 10 years. In 2006, for instance, when Ogunnaike was a freshman, not a lot of people had cellphones. Today, “they are Snapchatting and sending video messages back and forth,” he said. “In the old days, I would get up and visit my friends or block mates at their rooms, but today it is all about social media.”

In 2006 Facebook, which was created at Harvard, was just beginning, Ogunnaike said, but today students are on the site all the time.

“I don’t check my Facebook page and messages every day,” he said, “which means that I sometimes miss out on catching an impromptu game of soccer with friends.”

Like other universities, Harvard is becoming more Internet-friendly, Ogunnaike said. Harvard students can do more administrative tasks online now, such as completing study cards and securing books and journals without ever having to step foot in Widener, he pointed out.

Admitting to not being current on all the latest technological advances, Chomsky said that when he was at Harvard the Internet was Widener. “I had a desk in the stacks of Widener Library,” the 87-year-old Chomsky said. “Having a desk there was one of my favorite experiences at Harvard, because I was free to roam and explore all that information and knowledge that was all around me by just walking around and picking up a book here and a journal there. It was an amazing education that way.”

Anthony Chiorazzi has an M.Phil. in social anthropology from Oxford University and a master’s of theological studies from Harvard Divinity School. He has researched and written about such diverse religious cultures as the Hare Krishnas, Zoroastrians, Shakers, and Old Order Amish.