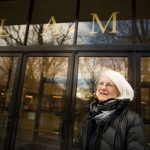 The Harvard that was

Named for the late matriarch, a woman who valued the transformational power of education, especially for women, the Chao Center was made possible by a $40 million gift from her husband, James Si-Cheng Chao, and her six daughters, four of whom are HBS alumnae. It is the first building at Harvard to be named for a woman and for a person of Chinese descent.