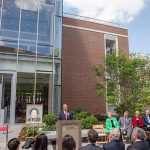 From the Indian College to student support programs and pow wows

The education of Native Americans is woven into the long history of Harvard University. The Charter of 1650, by which Harvard continues to be governed, pledges the University to “the education of English and Indian youth.”

Caleb Cheeshahteaumuck of the Wampanoag tribe, Class of 1665, was the first Native American to graduate from Harvard College. His classmate and fellow Wampanoag Joel Hiacoomes returned to Martha’s Vineyard to visit relatives just prior to graduation, but he was shipwrecked on Nantucket on his return trip and not seen again. Cheeshahteaumuck successfully graduated, but died a few months later in Watertown. From 1655 to 1698, the Indian College stood in Harvard Yard, on the site currently occupied by Matthews Hall.

Despite the University’s pledge to foster the education of American Indian youth, it was not until 1970, when the American Indian Program (AIP) emerged on campus, that a program was established to specifically address Native American issues. In 1990, the AIP was reorganized as the Harvard University Native American Program, with a focus on interfaculty scholarship and teaching, Native outreach, and student recruitment and support.

Three hundred and forty-six years after Cheeshahteaumuck, Tiffany Smalley ’11 became the second Wampanoag to graduate from Harvard College. She and her fellow Native American Harvard alums, now numbering more than 1,000, have experienced a Harvard far different than the former Indian College. But with Native Americans and Pacific Islanders together comprising only 1.5 percent of the Class of 2019, much work remains to be done: in recruiting more Native students, and in educating non-Natives about this vital segment of the Harvard community.