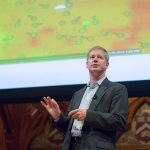 Keeping up with the weather

For those worried about the burdens of old age, a recent Harvard study has some good news.

The study says that the increase in life expectancy in the past two decades has been accompanied by an even greater increase in years free of disability, thanks in large measure to improvements in cardiovascular health and declines in vision problems.

The study, described in a May 30 working paper released by the National Bureau of Economic Research (NBER), was co-authored by David Cutler, the Otto Eckstein Professor of Applied Economics in the Department of Economics; Mary Beth Landrum, professor of health care policy at Harvard Medical School (HMS); Michael Chernew, Leonard D. Schaeffer Professor of Health Policy at HMS; and Kaushik Ghosh of the NBER.

“This suggests, for the typical person, there really is an act beyond work — that once you reach age 65, you can likely look forward to years of healthy activity,” Cutler said. “So this is good news for the vast bulk of people who can now look forward to healthier, disability-free life, but it’s also good news for medical care because it demonstrates the value of medical spending.”

“There has been an incredibly dramatic decline in deaths and disabilities from heart disease and heart failure,” Cutler said. “Some of it is the result of people smoking less, and better diet, but we estimate that as much as half of the improvement is because of medical care, especially statin drug treatment, which is both preventing heart attacks and improving people’s recovery.”

Much of the improvement in vision health, he said, can be summed up in a single word: cataracts.

“In the past, cataract surgery was very lengthy and technically difficult,” Cutler explained. “That same surgery today can be done in an outpatient setting so that complications and disability are significantly ameliorated.”

While improved treatment for heart disease and vision problems have significantly added to disability-free life expectancy, Cutler said some conditions remain a concern, particularly dementia, neurodegenerative disorders such as Parkinson’s disease, and chronic, disabling conditions such as diabetes.

To measure disability, Cutler and colleagues first turned to the Medicare Current Beneficiary Survey, an annual questionnaire that asks Medicare recipients whether they have difficulty with physical tasks such as walking, getting in or out of bed, or showering, as well as day-to-day tasks like cooking, managing money, or doing housework.

“The survey is designed to pick up how well people can live independently,” Cutler said. “About half of all elderly people say they have difficulty with at least one item.”

By combining those measurements of disability with life-expectancy data culled from the National Vital Statistics System, Cutler and colleagues were able to create a unique measure not only of overall life expectancy, but of how many of those years are likely to be free of disabilities.

“The data innovation we’ve made is to understand disability by time until death,” Cutler said. “There are surveys of what share of people are disabled … but we really need to know where that disability falls in the lifecycle.”

While the data clearly shows those trends improving, Cutler said there are still questions to answer, particularly whether the increases hold true across all socio-economic groups and geographic regions. Recent data suggests that improvements have been uneven across the population.

Ultimately, though, Cutler said the study challenges the idea of old age as a time when health problems and disabilities limit your options.

“It used to be that when you turned 70, your occupation became managing your health,” he said. “Now you can increasingly just live your life.”

The paper is titled “Understanding the Improvement in Disability Free Life Expectancy in the U.S. Elderly Population.” The research was funded by the National Institute on Aging and Pfizer Inc.