Labors of love for scholar at heart 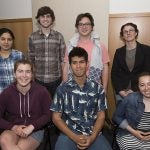 A chance to soar, through science

Reclining in a black leather chair with his feet on an ottoman, Leo Damrosch has the relaxed air of a man six years into retirement.

But don’t be fooled. There’s no time for golf or crossword puzzles for Damrosch, who is still doing serious scholarship, and enjoying every minute of it.

“Retirement’s going really well,” he said, speaking in his faculty study room at Widener Library. “I was just dying to have enough time to do research and writing. Now I get to do the things I’ve always liked doing without the administrative duties that took up my time.”

Since adding emeritus to his title as Ernest Bernbaum Professor of Literature, Damrosch has won a National Book Critics Circle award and was a Pulitzer Prize finalist in 2013 for “Jonathan Swift: His Life and His World.” More recently, “Eternity’s Sunrise: The Imaginative World of William Blake,” his study of the English poet and engraver, made this year’s shortlist for the National Book Critics Circle award in criticism.

Along with research and writing, the 75-year-old is still working with students. For the Harvard Summer School he’ll teach “The Rise of the Novel” and “The Enlightenment Invention of the Modern Self,” which he also teaches at Harvard Extension School. He draws particular satisfaction from connecting with high school students who manage to keep pace in college-level courses.

“The Summer School produces these jewels,” he said. “They work extra hard and are very grateful.”

In his Widener study, Damrosch works alongside his collection of miniature airplanes and photographs of a long-ago trip to his native Philippines. Interred in Los Baños prison camp in Luzon during World War II, Damrosch and his family were liberated in 1945. Five years later, they moved to the United States, making their home in small-town Maine.

“I don’t have enough of a personal story,” he said, asked when he would write his own biography. “I don’t have a hook. I last went to the Philippines with my father when I was in my 30s, and that was a wonderful experience. But my own memories from childhood aren’t enough for a book.”

He joined the English faculty at Harvard in 1989, but Damrosch, who held the department chair from 1993-98 and served as acting chair in 2007, felt as if he “never had enough time.” Now that he has no official department duties, Damrosch gets to do what he’s “always liked doing,” which included his research on “Eternity’s Sunrise.”

“Blake is an original genius,” he said. “This book is intended to introduce him to general readers, and couldn’t have been written 30 years ago. Back then, art critics and literary scholars didn’t interact much. But more recently, gifted scholar-printmakers have done wonderful work, helping us to understand how his images were created and printed.”

Damrosch knew his book had to include first-rate illustrations, a belief shared by his editor at Yale University Press, who ensured that “Eternity’s Sunrise” included 40 color reproductions. A Washington Post review praised the book for its “intricate analysis of the relation between Blake’s verse and his vivid paintings and etchings.”

Next up for Damrosch, besides teaching fall and spring courses at the Extension School, will be more work on a book to be titled “Jamie and Sam: Boswell, Johnson, and the Club.” Damrosch describes it as “a group portrait during an extraordinary historical moment,” featuring writers and thinkers such as Edmund Burke, Edward Gibbon, Oliver Goldsmith, and Adam Smith.

“Many people are reluctant to retire,” he said. “Their sense of self is invested in their academic position — not in a selfish way. I’ve been fortunate in being able to go on doing what I most enjoyed in academic life — teaching and writing — with more time to devote to them than I used to have.”