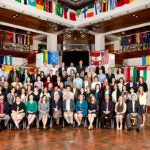 The Sustainability Science Program at 10

Jiyoo Jye creates a research archive of her discoveries, progress

As the world’s population continues to climb, the climate continues to change, and issues of water and food scarcity arise, interest in alternative farming mechanisms is growing. Jiyoo Jye, M.Des. ’16, a recent graduate of the Harvard Graduate School of Design, is attracted to the social and cultural narratives within this agricultural revolution, as captured in her living, open research archive Rooted in Air.

Hydroponic, aeroponic, fogponic, aquaponic, and related systems for growing food require fewer natural resources and can be constructed for as little as $30. A do-it-yourself culture is in full bloom, with more of these methods becoming available to the masses and to the novice farmer. “Rooted in Air” is Jye’s contribution to this blossoming community, an online platform for case studies, idea-sharing, and discussion.

With help from a student sustainability grant from the Office for Sustainability, Jye was able to expand her thesis research into a full-fledged investigation of soil-less farming modules and the urban stewardship that these methods can promote.

Of her research, Jye said, “It’s about growing produce in the absence of soil and investigating ways in which soil-less farming informs plausible solutions for urban food production. In doing so, it reflects upon how the revolution of alternative urban farming practices are engineering new feedbacks within the synthetic ecology of agriculture and considerably influencing the social actors of its domain. The survey of soil-less farming systems offers a framework for comparing how agricultural practices are being aligned with economic viability across scales.”

To begin her exploration, Jye turned to research to look at environmental and societal extremes, such as droughts, floods, and food crises, that can move people to these alternative farming mechanisms while also examining the increasingly popular desire to connect more with our food: to know how it’s grown, where it comes from, and often to grow it ourselves.

As part of this “witnessing” phase, Jye gathered case studies on alternative farming, including the MIT OpenAg Initiative, the O’Hare International Airport Aeroponic Garden, Japan’s Granpa Dome, and the underwater Nemo’s Garden in Italy, all of which are archived on her site. From these examples, Jye began to weigh the pros and cons of soil-less agriculture.

She found that these systems save water, often eliminate the need for harmful pesticides (due to their required sterile environments), and offer a higher yield per square foot, thus encouraging the DIY movement of scaling and customizing personal farms.  Additionally, soil-less farming methods are continuously forming new kinds of environments, or rather sealed containers, of synthetic naturalism. However, she also found that most of the systems are still new and rely completely on electricity, and thus are not yet able to be the primary means of urban food production.

Jye’s next step was to “situate.” She immersed herself in the trial-and-error process of creating a personal aeroponic module, which she dubbed “Aeropond.” Before she went too deep into renderings, Jye, who has no farming experience, set out to see if she could grow a seed into a pea. Through this discovery process, she also spent time thinking about containers, moving from growing plants in natural and tradition-steeped terra cotta planters to sterile, synthetic plastic vessels.

“I’m at a point now where I’m starting to understand their temperaments — how vulnerable plants are, but also how strong they can become,” said Jye, noting also that she has developed a newfound agricultural vernacular.

Ultimately, after successes and failures (she was able to grow the pea), Jye decided that what seemed to be missing was the middle ground. She’s now most interested in bridging the gap between personal experience and communal action, and in urging others to think about their places as social actors in the food system.

Through her research archive, Jye also hopes that the growing number of projects and case studies will not only help build community, but, through dialogue, encourage those who may have felt intimidated to plant some starting seeds.