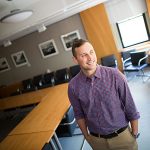 In the late 1990s, computer-chip makers were facing a Moore’s Law dead end, and Harvard chemist Roy Gordon thought he could help.

The famous dictum said that transistor density on a computer chip would double every two years. Gordon knew that the problem with Moore’s Law didn’t come in understanding the dizzying pace of technological change that it describes; it involved coming up with innovations that can sustain that pace. And Gordon had made a career as an innovator.

Gordon, who says he’s always been interested in chemistry — his scar from an explosion in his childhood chem lab is proof — already had transformed one industry.

In the ’70s, as America staggered through the Arab oil embargo, Gordon discovered a way to save energy by coating ordinary window glass to make it a better insulator. The coated glass retains a home’s heat in winter and its cool air in summer. Today the process is still widely used as one of two major ways that low-e glass is made. His coated glass is also the starting point for making most thin-film solar cells.

That was Gordon’s best-known discovery — earning him a spot in the Corning Museum of Glass — but he has been issued 100 patents. Gordon’s expertise in creating ultra-thin films with particular chemical properties is valuable across multiple industries, and would prove vital in enabling Moore’s Law to continue.

For decades, Moore’s Law had held true. Electronic components shrank, and that fed astonishing leaps in processing speed, leading to rapid evolution in computers, cellular phones, and a growing range of devices made smart by adding a chip brain.

Yet if electronic devices were to get smarter, smaller, and thinner, the semiconductor industry had to solve a problem with a new kind of insulator called a “high-k dielectric.” The previous insulator had worked fine for a while in keeping electrical currents segregated where chip designers wanted them. But in thinner layers, the insulator got leaky. So industry scientists experimented with rare metals to take its place.

Experiments were essential because chip architectures were evolving too. The demand for more surface area had led chip designers to propose three-dimensional structures on what previously had been flat chips. While that provided the needed real estate to make chips smarter, it created a new problem. Instead of just raining atoms onto flat chip surfaces, scientists had to coax them to spread evenly into sometimes extreme nooks and crannies.

After talking with colleagues at conferences and reviewing the industry’s public roadmap — essentially a wish list of new technologies — Gordon became intrigued by this problem: How do you lay down a thin film across such extremely rough terrain?

“Very few industries admit to being stuck about where they want to go next,” said Gordon, who holds joint appointments as Thomas Dudley Cabot Professor of Chemistry in the Department of Chemistry and Chemical Biology, and professor of materials science in Harvard’s John A. Paulson School of Engineering and Applied Sciences. “The semiconductor industry encourages innovation. It publishes this roadmap. For a scientist, it’s a goldmine. You can find out what are the important problems to solve.”

Over a few years, Gordon, his graduate students Jill Becker and Dennis Hausmann, and postdoctoral fellow Seigi Suh would play central roles in making that high-k dielectric insulator work. Their primary innovation, filed at the U.S. Patent Office in 2000 and described in scientific papers in 2001 and 2002, was to create a novel carrier molecule, one never before seen outside of Gordon’s lab, as well as to identify a class of precursor molecules ideally suited to use in a method called atomic layer deposition (ALD) to create thin films. This precursor molecule delivered the insulator where it had to go. Once there it released the metal atoms to form a uniform layer, while its other components — such as carbon, nitrogen, and hydrogen — were easily removed, leaving behind the pure insulator layer.

The Gordon lab’s innovation enabled the use of high-k dielectric insulators, smaller electronic components, and ultimately faster computers and smartphones. But the inventors’ contributions have often gone unacknowledged outside of academia.

Widespread, unlicensed use in the semiconductor industry has prompted Harvard to file patent-infringement suits against two major chipmakers, Micron and GlobalFoundries. The University believes that these companies have violated patents that claim inventions created in Gordon’s lab.

“Our strong relationships with industry leaders, entrepreneurs, and investors ensure the development and commercialization of cutting-edge innovations that arise in University labs,” Kohlberg said. “It’s a crucial part of our academic mission and our role in the global economy — to disseminate impactful technologies so that they can become useful products and bring benefit to society. Harvard launched 14 startups last year and granted 50 technology licenses because companies value Harvard research, and our faculty expect it. They want to see their work doing good in the world.”

Innovations take time to reach their full potential. A discovery in cancer biology, for example, may lead to a new therapy only after years of drug development. And very large manufacturing operations such as the semiconductor industry can be slow to fully adopt new materials and processes. That’s why the patent system protects the efforts of inventors and licensees for up to 20 years.

“This is about honoring the intellectual property rights of our inventors,” said Kohlberg, who oversees Harvard’s Office of Technology Development. “It’s their ideas, their teamwork, their long days and nights in the lab, and their persistence through setbacks that advances science for everyone’s benefit, and they deserve recognition for that.”

One common commercial product that initially posed a challenge for manufacturers as chip structures evolved was dynamic random access memory (DRAM), which provides a computer’s working memory. DRAM swaps information in and out of memory nearly instantaneously and is a significant factor in the speed at which a computer performs.

Three-dimensional DRAM chips were designed with extreme features: very deep and narrow slots that needed to be conformally coated with a high-k dielectric material such as hafnium oxide.

“I thought it a very important and interesting technical problem,” Gordon said.

Industry scientists were using a compound called hafnium chloride to try to carry hafnium into the slot, but while it could create a hafnium oxide film on the upper portion of the chip architecture, it left the deep recesses bare.

Gordon had worked extensively with thin films in the past, but he recognized that the high-k dielectric problem would require using ALD.

“When it works, it’s a marvelous process. It makes layers of very uniform thickness, gives good control over how thick that layer is,” Gordon said.

After looking at commercially available ALD machines, however, he decided it would be possible to make one that better suited his needs, and at a fraction of the cost.

So Gordon worked with members of his lab to build such a machine. They explored a variety of options, such as using automotive fuel injectors to spray the hafnium-containing vapors, but found the chemicals were more caustic than gasoline and corroded the injectors. Soon, through trial and error, his researchers designed and built a working system.

“We worked long hours to get the experiments to work,” Gordon said. The research team even worked straight through some holidays; an entry in one lab notebook opens with “Merry Christmas.”

“It’s not as if my students joined a lab that was already doing it [ALD]. We had to set up everything, build it, test it, make sure it worked,” Gordon said.

The team discovered a class of compounds, called metal alkylamides, that did the trick, producing a uniform coating throughout deep trenches.

“We had results that I was very excited about,” Gordon recalled, “because we solved an important problem, something nobody else had done.”

The result of Gordon’s team effort also worked on test structures similar to those on a DRAM chip. Word spread, and the compound began to be used in the industry, Gordon said.

“This was quite an eye-opener for people in the field,” he said. “These compounds became very popular because they worked so well.”