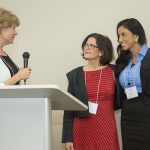 The courtyard at Winthrop House’s Standish Hall will be renamed in honor of longtime Harvard supporter James F. Rothenberg ’68, M.B.A. ’70, who died last July. A tribute to Rothenberg’s commitment and thoughtful philanthropy, the courtyard dedication was made possible through a gift by the Hutchins Family Foundation, at the direction of Glenn Hutchins ’77, J.D./M.B.A. ’83.

Described by many as the consummate University citizen, Rothenberg championed Harvard in a variety of roles that included serving as the University’s treasurer, a member of the Harvard Corporation, chair of the board of directors of Harvard Management Co., and co-chair for The Harvard Campaign, which launched in September 2013. A dedicated alumnus and Harvard parent, he was an active volunteer for both the College and Harvard Business School, serving on the Faculty of Arts and Sciences’ Dean’s Council and the Business School’s Board of Dean’s Advisors, as well as co-chairing several of his College reunions.

Both Rothenberg and Hutchins have been generous supporters of House renewal, an initiative to enhance the eight neo-Georgian Houses along the Charles River to ensure that these hubs for academic and social learning meet the needs of 21st-century students. The effort seeks to maximize community interactions and reconfigure interiors with new and expanded spaces, including “smart” classrooms, art and music rooms, and areas for advising, student programming, and socializing.

“Jim Rothenberg quietly financed the renovation of Old Quincy and, characteristically, had it named after Bob Stone,” said Hutchins, referencing Quincy House’s Stone Hall, which reopened to students in August 2013 after a 15-month renovation. “Now it is our turn — and my privilege — to create a permanent recognition of all that Jim did for Harvard.”

“It is fitting for the courtyard at Winthrop’s Standish Hall to be dedicated to Jim through Glenn’s generous support,” said Michael D. Smith, Edgerley Family Dean of the Faculty of Arts and Sciences. “Both Jim and Glenn were quick to grasp the potential of House renewal to strengthen the student experience. I am tremendously grateful to both of them and know that the success we have seen in this project would not have been possible without their partnership.”

Winthrop House, which is home to an average of 400 undergraduates each year and the fourth House to undergo renewal, was closed for the renovations on May 31 and is expected to reopen in the fall of 2017.