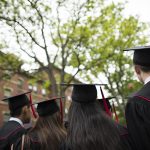 After all, it was the law that changed hers. A blind Israeli of Arab descent, she attended a Jewish school. Israeli law mandates that schools accommodate students with disabilities, regardless of their origin.

Now, set to graduate with an LL.M. degree from Harvard Law School (HLS), Abu Elyounes plans to become a public service lawyer to ensure that everybody has access to the law.

“I was helped by laws that allow people like me to overcome barriers and be fully integrated into society,” said Abu Elyounes as she sat in her dorm room, a smile spread across her face. “Now I want to give back.”

Abu Elyounes grew up in Haifa, the daughter of a nurse and a businessman. Through most of her life, she was the only Arab student at her school. Her two siblings attended Arab schools, which have fewer resources to meet the needs of disabled students, she said.

“My parents were very open-minded because they wanted me to live a normal life,” Abu Elyounes said. “My mother is very strong and my dad is very level-headed. What I am today is because of my parents.”

Abu Elyounes grew into a strong-willed woman who never felt limited by her blindness. She studied music for 12 years, learned French, and once went skydiving. She started her compulsory military service at 18, working as a paralegal at the Legal Aid Office of the Israeli Ministry of Justice. With her ability to speak both Arabic and Hebrew, she helped Arab-Israeli citizens obtain legal assistance with family and work issues.

It was then that Abu Elyounes realized that she wanted to become a lawyer.

“By law, Arab-Israeli citizens have the same rights as the rest of Israelis, but they don’t have the same opportunities and many don’t know their rights,” she said.

At HLS, Abu Elyounes chose her focus because she is fascinated by the changes technology brings to people’s lives. She holds up her own life as an example. To access class material and the Internet, she relies on a screen reader and a Braille display on her computer. On her cellphone, she uses a gesture-based screen reader that lets her know what’s going on around her. The device is a great help when choosing outfits or counting change, she said. “I just point my cell at things and it tells me what color is my shirt or how much money I have.”

Her year at HLS was the best of her life, said Abu Elyounes. She enjoyed the rigor of law studies, the thrill of meeting lawyers from all over the world in her 180-student program, and the role her studies played in strengthening her commitment to service.

Abu Elyounes was a finalist for the Gary Bellow Public Service Award, which rewards students for their interest in social justice. In her essay for the Bellow, Abu Elyounes wrote how important it is to her to lead a public service career, and thanked the people who helped her along the way: “My road has been long and I was often helped by the supportive individuals around me.”