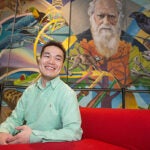 Erica Tukiainen, earning a master’s in public health, wants society to get up and exercise

The rigors and rewards of basketball helped Erica Tukiainen find her way, and she’s been working since then to make healthy living easier on the rest of us.

Tukiainen is headed toward a career in medicine, but she interrupted her studies to spend a year learning from nutrition and obesity experts at the Harvard T.H. Chan School of Public Health. Tukiainen, who is graduating in May with a master of public health in social and behavioral sciences, has been working to scale up a community-based anti-obesity program to reach disadvantaged children in the Boston area.

In the program, run by Kirsten Davison, the Donald and Sue Pritzker Associate Professor of Nutrition, Tukiainen works with parents, talking with them about the program and gathering feedback on the curriculum, which is distributed through Head Start.

“Erica is very natural. … [In] this collaborative process, empowering others comes very naturally to her,” Davison said. “I think it’s very much needed … to address obesity. Getting M.D.s involved in this process, of course, is a piece of this puzzle.”

Tukiainen was an overweight child herself when she took up sports at her mother’s urging. She grew up in Finland and moved to Los Angeles in 2000 when she was 13. She played in park leagues and high school. She excelled at basketball and eventually earned a scholarship in the sport to the University of California, Los Angeles (UCLA).

She played all four years, captaining her junior and senior year teams, and graduating in 2010 with a degree in French. She then became a research assistant for Antronette Yancey, a UCLA professor investigating physical activity and nutrition promotion. Tukiainen worked on Yancey’s idea of promoting “instant recess”: quick, easy, no-equipment exercise breaks spaced through the day for people in sedentary settings, from schoolchildren to seniors.

“I learned about working with the community — we worked in poor communities, worked with faith-based organizations, with schools — and saw the challenges with different groups,” Tukiainen said. “We’re so used to sitting in the workplace.”

That work sparked her interest in promoting exercise to fight obesity and as part of a healthy lifestyle. That led to UCLA’s David Geffen School of Medicine and a program under which students are required to take a break between their third and fourth year to pursue other studies.

For Tukiainen, the Harvard Chan School offered her the chance to work with global leaders in obesity prevention and nutrition, something she has enjoyed although the year has been a whirlwind. In addition to her studies and her work on Davison’s Communities for Healthy Living program, Tukiainen also worked on an obesity program at Boston Children’s Hospital, using social media to communicate with parents on obesity and weight loss.

“I wanted to be challenged, which I have been, very much so,” Tukiainen said. “I was looking for leaders in obesity prevention and specifically for classes that would provide skills for things I was already exploring through experience.”

Science already knows a lot about obesity prevention and healthy lifestyles, Tukiainen said, and it’s important that that information get out to physicians. One of the difficulties in the obesity fight is how best to deliver those messages so they have an impact.

Next year, Tukiainen will head back to Los Angeles to complete her final year of medical school and apply for residency programs. She plans to go into family medicine and to incorporate what she’s learning now about fighting obesity into her medical practice.

“The wonderful challenge is how do I find a balance between the two,” Tukiainen said. “How do we find this blend where we’re doing the right thing for communities but at the same time getting health outcomes to improve [individual] health. I don’t have the answers yet, but I’m working on it.”