Design, inspired by ‘the trays’ 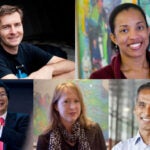 Before Gund Hall was built in 1972, the Harvard Graduate School of Design was scattered across five separate buildings. Architect John Andrews M.Arch. ’58 brought the school together under one roof. At the heart of the new construction was “the trays,” an enormous multi-tiered studio space.

“The studios on all floors are open to each other, each studio tray overlapping the one beneath it and tucked under the one above,” reads a 1969 article in Architectural Forum. “The building gathers all studios into one open, integrated environment. Gone are the separate identities cherished by competing department ‘empires.’”

Past architectural writings refer to the floors as balconies, terraces, tiers, lofts, and steps. Andrews, in the architectural drawings, denoted each level as “studio,” but the term “the trays” won out. “The idea has been to eliminate walls, physically and ideologically, among departments; this is a school for the study of the total environment,” wrote critic Ada Louise Huxtable in a 1972 article in The New York Times.