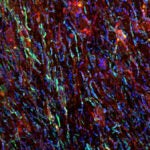 Walking through Harvard Yard, you see it every day — one person stops to look skyward, perhaps trying to catch a glimpse of the hawks that call the area home, and soon most passersby are stopping to look in the same direction.

It’s a phenomenon known as “gaze-following,” and although it’s been demonstrated in dozens of species, researchers have theorized that it may develop in a unique way in humans, because it plays a critical role in learning and socialization.

A new study, however, shows that gaze-following in monkeys develops in a way that’s nearly identical to how it develops in humans, suggesting that the behavior has deep evolutionary roots. The research is described in a May 11 paper published in the Proceedings of the Royal Society B.

“Even though it seems like it’s a very simple thing, this is a foundational social and cognitive skill that humans have. And there has been little research on how this skill develops in other species,” said first author Alexandra Rosati, an assistant professor of human evolutionary biology. “This is the largest study ever looking at gaze-following in monkeys. We followed how this skill developed through their whole lifespan and examined the psychological mechanisms they were using to exhibit this behavior.”

This monkey was categorized in the infant cohort (less than 1 year of age). The demonstrator (E1) and camera person (E2) stood next to each other, approximately 1-2 meters away from the monkey. E1 can be heard calling the monkey’s attention. When the monkey looks at her face, she says “now” and looks straight up, holding that position for the rest of the trial. E2 films the monkey’s face and times the trial, saying “stop” after a full 10 seconds has passed. Videos courtesy of Alexandra G. Rosati, Alyssa M. Arre, Michael L. Platt, and Laurie R. Santo

By studying more than 480 monkeys ranging from two weeks to 28 years old, Rosati and colleagues from Yale University and the University of Pennsylvania found that gaze-following in macaques first appeared a few months after birth, peaked among juveniles, and then slowly declined into old age. The study also revealed that female monkeys were more sensitive to gaze cues than males, matching findings on humans.

“We found that monkeys are very similar to humans in the developmental pattern across their lifespan,” Rosati said.

To carry out the research, Rosati and her colleagues traveled to Cayo Santiago, a small island off the eastern coast of Puerto Rico inhabited by a colony of about 1,500 macaques that live in free-ranging groups.

“We would approach a monkey when it was sitting calmly and try to attract their attention,” she said. “As soon as the monkey looked at the experimenter, the experimenter would just look straight up. A second person would be filming the monkey, so we could see if the monkey also looked up.”

“Compared to other primates, humans have a much longer juvenile period, we have a very long life span, and there are characteristics of human aging — like menopause — that are not shared with other primates,” Rosati said. “These monkeys are quite dissimilar from us in a lot of these life-history characteristics, and we thought this is a great test of whether those human life-history characteristics are tightly intertwined with this cognitive development pattern. If we could show that the monkeys’ social cognitive trajectory is very similar to ours, that lets us make inferences about what is driving this pattern in our species.”

The researchers hope to eventually correlate the differences in behavior among monkeys with variations in their social behavior and even genetic differences.

In this trial, the adult male monkey makes three discrete looks upward: looking up, looking away in a different direction, and then looking up again. Multiple discrete looks was one index of the cognitive processes underlying monkey gaze following, as it reflects attempts to locate the (absent) target.

“We want to integrate this data with what’s going on in real life,” Rosati said. “We want to see what’s happening with the 30 percent of juvenile monkeys that don’t follow gaze. Can we find genes that are associated with that behavioral difference? Similarly, is it the case that monkeys that gaze-follow a lot as juveniles are more socially competent?”

Ultimately, Rosati said, the study revealed that gaze-following, while not unique to humans, probably serves as foundation for a host of more advanced social skills on which humans rely.