Spielberg: Find a ‘villain to vanquish’ 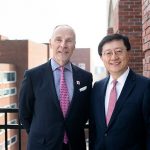 Harnessing the strength of the alumni community

Don’t shy away from the world’s pain. Instead, examine it, challenge it and, while you’re at it, find “a villain to vanquish,” acclaimed filmmaker Steven Spielberg urged this afternoon in his Commencement address to Harvard’s Class of 2016.

Unfortunately, Spielberg said, there are plenty of villains in real life, not just in the movies. Hate in all its forms endures worldwide, and genocide didn’t stop with the Nazis. The Shoah Foundation that he started in 1994 to document the experiences of Holocaust survivors not only has spoken with 53,000 survivors and witnesses of that calamity, but also has begun to interview survivors of atrocities in Rwanda, Cambodia, Armenia, and Nanking.

“We must never forget that the inconceivable … happens with frequency,” Spielberg said. “Atrocities are happening right now.”

As a director, writer, and producer, Spielberg has created some of the most enduring movies of the last half-century, his creations ranging from the blockbuster suspense of “Jaws” to the magical sweetness of “E.T.” to the all-too-human inhumanity of “Schindler’s List” and “Saving Private Ryan.” He addressed the newly minted graduates, family members, and alumni during the Afternoon Program in the outdoor Tercentenary Theatre.

His speech, which drew laughter as well as nods with a standing ovation at its conclusion, capped a long day of pomp and tradition that kicked off with the sheriff of Middlesex County theatrically calling the “meeting to Orrrderrrr!” at 9:45 a.m. It ended just before 4 p.m., shortly after Spielberg’s address. In between, thousands of visitors heard speeches, both poignant and humorous, from student orators; watched honorary degrees bestowed on giants in the arts, humanities, and sciences; and saw more than 7,700 loved ones receive degrees from Harvard College and the University’s graduate Schools. 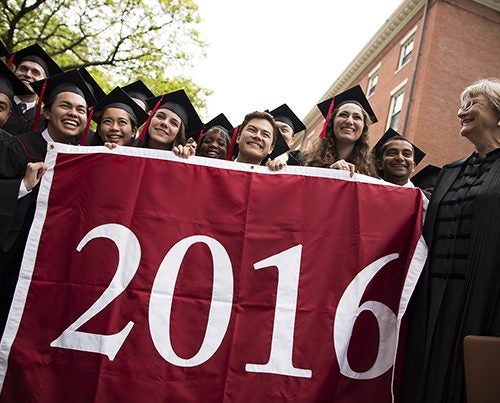 The splendid tapestry of Commencement

Photos show the many sides of Harvard’s celebratory ritual

Harvard President Drew Faust also addressed those gathered for the Afternoon Program, officially the annual meeting of the Harvard Alumni Association. Universities, Faust said, are needed now more than ever, even though the broader society seems increasingly to discount the importance of reason and knowledge.

Faust cited two signature buildings that flank Tercentenary Theatre, Memorial Church and Widener Library, as examples of the important role that Harvard plays and the characteristics and values that it seeks to instill in its students.

Widener Library, whose 57 miles of shelves are at the center of a University system with 17 million books, represents knowledge and truth, a tenet that Faust said is important not just to discover but to test and affirm, so that people can discern when what is presented as true is not.

Memorial Church, on the other hand, represents values, responsibility, and sacrifice. Its walls are inscribed with the names of Harvard’s World War I dead, the departed whose reason and knowledge were partner to a sense of responsibility that called them to service.

“There is no value-free science,” Faust said to applause. “There is no algorithm that writes itself. The questions we choose to ask and the research we decide to support, the standards of integrity we expect of our colleagues and students, the community we build and the model we offer — all of this is central to who we are.”

Adhering to values and morality is pivotally important for graduating seniors about to choose their next paths in life, decisions that to a great extent will define who they are and the people they will become. Harvard College, Faust said, seeks not just intellectual transformation, but personal and social shifts as well, in a process that takes diverse individuals and develops them into a community.

“In a world divided by difference, we at Harvard strive to be united by it,” Faust said. “We seek to educate people, not just minds. Our highest aspiration is not just knowledge, but wisdom.”

In his speech, which followed Faust’s, Spielberg shared some of his own history. He dropped out of college as a sophomore to take a dream job at a movie studio. Though that “went all right,” as he described it, he returned to campus in his 50s to finish his degree. He did that for his children’s sake, to “walk the walk” that education is important. He said he was able to get away with his early collegiate exit because he had been blessed with knowing what he wanted to do with his life, something not true for many young people.

Spielberg called the choice of the initial path to tread the first “character-defining moment” for the new graduates, and said that although characters in a movie usually face only a handful of such moments, real life is full of them. He urged the graduates to listen not to the internal voice that loudly tells them what they should do, but the quieter one that tells them what they could do. It was that voice, he said, that pulled him toward key projects that propelled his career in a more serious direction that was unexpected after his string of early crowd-pleasing blockbusters.

He said it was when he directed “The Color Purple” that he became familiar with the pain — and the truths — of the lives of black women in the 1930s Deep South. The film, he said, showed him that a movie could be a mission.

He said he hoped that the graduates would work to find the same sense of personal mission, and he urged them to understand history — to not be “a leaf that didn’t know it was part of a tree” — even though social media is constantly focusing people’s attention to devices, to right now. He urged his listeners to make personal connections, to not just stick to their values, but act on them.

“In your defining moments, do not let your morals be swayed by convenience or expediency. Sticking to your character requires a lot of courage,” Spielberg said, later adding, “Today, you start down the path of becoming the generation on which the next generation stands. And I’ve imagined many possible futures in my films, but you will determine the actual future. And I hope it’s filled with justice and peace.”

Director, producer, and screenwriter Steven Spielberg delivers his speech at Harvard’s 365th Commencement on May 26, 2016 at Tercentenary Theatre.