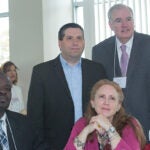 Changing a community, from the ground up

“I’m tremendously pleased that these two very talented and strong members of the Harvard community will assume these important roles,” Khurana said. “Both Latanya and Sylvia have demonstrated a strong commitment to teaching, learning, and community-building in their careers, and will be a wonderful addition to Harvard College’s residential community as the faculty leaders of Currier House.”

Sweeney is professor of government and technology in residence and director and founder of the Data Privacy Lab at Harvard. She is editor in chief of the journal Technology Science, former chief technology officer at the U.S. Federal Trade Commission, and distinguished career professor of computer science, technology, and policy at Carnegie Mellon University. In 2001, Sweeney became the first African-American woman to earn her Ph.D. in computer science at Massachusetts Institute of Technology (MIT).

Her undergraduate program began at MIT, and after 10 years away to run a business, she returned to graduate with a degree in computer science from Harvard Extension School in 1995, at which time she gave a motivating and often-cited graduation speech about those in academic despair.

Barrett is a lawyer who has lived most of her adult life in Cambridge but grew up in New York and South Korea with her African-American father, Korean mother, and younger brother. She first came to Cambridge to attend MIT and immediately felt at home in the area’s diverse communities. During her junior year, she got the entrepreneurial bug, like many of her peers at the time, and left MIT to start a computer company with Sweeney.

After almost 10 years in the business arena, Barrett returned to school and graduated from Harvard Extension School (A.L.B. ’95) and the University of Pittsburgh School of Law (J.D. ’02). For a brief time, she worked in the Science Center, designing and facilitating technology options for the Extension School and Harvard Summer School courses. In law school, Barrett was editor in chief of the Pittsburgh Journal of Technology Law and Policy, won the National Association of Women Lawyer’s Student Achievement Award, and received the School of Law Community Service Award. After graduation, Barrett engaged in private practice, specializing in business law.

The two met as MIT undergraduates and have been together for 30 years. Their son, Leonard, is 8 years old and into everything. His current passions are “Magic the Gathering” trading cards, chess, reading, and biking.

Interim Dean of Student Life Tom Dingman, who assisted in the search, said of the new deans, “The students, tutors, and staff on the in-house advisory committee who met Latanya and Sylvia were impressed greatly by their warmth, varied experience, and high energy and interest.”