‘Making Harvard a campus for all’ 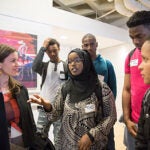 A place where startups begin

By fall of 2017, College to have limits for new students who join single-gender social organizations

Citing the harmful impact created by gender discrimination affecting students at Harvard College, administrators announced today that beginning in the fall of 2017, new students who join unrecognized single-gender social organizations will not be permitted to hold leadership positions in recognized student organizations and athletic teams.

In an email to undergraduates, President Drew Faust today endorsed the policy change, which was recommended by Danoff Dean of Harvard College Rakesh Khurana.

“Throughout its history, Harvard has worked to broaden its educational reach, to enhance the effectiveness of its teaching, and to ensure that its students are prepared for the diverse world into which they will graduate,” Faust wrote. “Over time, Harvard has transformed its undergraduate student body as it has wel­comed women, minorities, international students, and students of limited financial means as an increasing proportion of its population. But campus culture has not changed as rapidly as student demography.

“A truly inclusive community requires that students have the opportunity to participate in the life of the campus free from exclusion on arbitrary grounds,” she continued. “Although the fraternities, sororities, and final clubs are not formally recognized by the College, they play an unmistakable and growing role in student life, in many cases enacting forms of privilege and exclusion at odds with our deepest values. The College cannot ignore these organizations if it is to advance our shared com­mitment to broadening opportunity and making Harvard a campus for all of its students. Nor can it endorse selection criteria that reject much of the student body merely because of gender.”

The new policy, which would not apply to current undergraduate students or those expecting to matriculate this fall, also would prohibit members of unrecognized social organizations from receiving the dean’s endorsement for prestigious scholarship opportunities.

“Harvard has a long and complex history of grappling with gender discrimination, dating back to before Radcliffe was chartered … and stretching into the present, when Harvard has resolutely taken steps to remove the antiquated barriers to women’s full participation in the University’s academic and extracurricular opportunities,” Khurana wrote. “In every era, change has come slowly and often with fierce opposition. Even in recent decades, as our community has undergone a dramatic and positive transformation, the unrecognized single-gender social organizations have lagged behind in ways that are untenable in the 21st century.”

Understanding that social activities play an integral role in undergraduate life at Harvard, the College also announced it will continue to increase funding for alternative campus social opportunities, which has grown already by 73 percent over the past two years.

Harvard College grew increasingly concerned about the gender-exclusive membership practices of male final clubs in the 1970s, citing concerns that they undermined students’ intellectual and social environment and jeopardized students’ safety. Formal ties were severed in 1984, after the clubs refused to admit women. Over the past year, two clubs have announced plans to admit women, while one, the AD Club, has announced it will hold a more open admissions — or punch — process, but only for men. Because final clubs are unrecognized and do not make membership lists public, there is no precise estimate of the percentage of students who are members of male clubs or other single-gender social organizations, or their demographic makeup.

In his recommendation to Faust, Khurana emphasized that Harvard must establish expectations for members of its community that align with the College’s values and goals.

“Although they are private organizations, these unrecognized, single-gender social organizations are comprised principally, if not exclusively, of Harvard College students and undermine Harvard’s campus culture,” Khurana wrote. “At the same time, their fundamental principles are antithetical to our institutional values. Harvard has the obligation to establish the general regulations and standards governing Harvard students, faculty, and staff that are consistent with our educational philosophy.

“As importantly,” he added, “the College must ensure that when it permits its resources to be expended, when it allows its name to be used, and when it endorses the actions of its students, it does so in a way that is consonant with its core value of non-discrimination and of fostering a diverse community where students are educated through experiences with individuals of different genders, gender identity, sexual orientation, and racial and ethnic background, among other attributes.”

The dean noted the proposed policy change does not regulate the membership policies of the organizations themselves, or students’ ability to join them.

“These new policies will not prevent undergraduates from choosing their own paths while at Harvard,” Khurana noted. “They are not designed to regulate the internal affairs of the unrecognized social organizations; the organizations retain the authority to set their membership criteria, even as the College will continue to urge them to adopt inclusive and non-discriminatory policies. Likewise, students will be able to continue to join these organizations and remain in good academic standing with the College. The recommendations are instead focused exclusively on decisions belonging to the College about what it funds, sponsors, endorses, or otherwise operates under its name.”

In her response, Faust noted the difficulty of enacting change in the wake of longstanding tradition.

“Culture change is not easy, and members of our community will inevitably disagree about how to move forward,” she wrote. “No action is likely to prove a perfect solution to the complex array of issues of gender equity, equality of student access to powerful social resources, student choice, and other factors, including the well-being of our students, that are at play here. But we have as our touchstone an educational experience in which students of all backgrounds come together, learn from each other, and enjoy the transformational possibilities presented by sustained exposure to difference. By reinforcing core principles of non-discrimination and inclusion, the recommendations of the College represent an important next step in our ongoing progress toward that goal.”

Across campus and beyond, a number of Harvard community members endorsed the announced plan.

“Gender-exclusive clubs are a thing of the past, or ought to be. Harvard’s move to end discriminatory practices at final clubs is welcome and timely. I applaud the University’s leadership for taking this step,” said Deval L. Patrick, former governor of Massachusetts.

“The intent is neither to demonize nor denigrate any group on campus. All of us must pay attention to how our actions impact the larger community. When our associations and communities of support shift from nurturing those within to diminishing those without, they are no longer consistent with the principles of a positive learning community,” said the Rev. Jonathan L. Walton, Plummer Professor of Christian Morals and Pusey Minister in the Memorial Church.