Inspired to serve, and lead 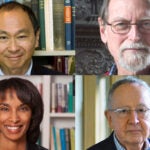 It was a memorable day for James Clarke ’16, who departed Tercentenary Theatre as a 2nd lieutenant in the Army.

And it was memorable for Clarke’s parents, Lt. Col. John Paul Clarke, who graduated from Harvard College in 1967, and Kendra Warren, a 1993 Harvard Kennedy School graduate who worked for the Defense Department as a civilian.

Before the Reserve Officers’ Training Corps (ROTC) commissioning ceremony on Wednesday, Clarke’s parents and his brother, Kenneth Russell, an infantry officer who just returned from Afghanistan, surrounded him to share their pride and joy. On the steps of Memorial Church, Clarke was beaming.

“I get to graduate from Harvard, which is in itself a great honor, and I get to go into the Army to serve my country, which is again a great honor,” said Clarke, a native of Chesterfield, Va. “And perhaps, the best for me is to follow my family tradition of service to the country.”

Clarke was among 12 seniors honored at the ceremony. It was the largest crop of commissioned officers at Harvard since 2010, President Drew Faust said in her remarks.

“This is a historic time, one that reminds us of proud traditions these young officers will carry forward into a new era as they join the long Crimson line,” said Faust, as she saluted the new officers. “With your commissioning today, you join an exceptional company, a fellowship unlike any other at this University or elsewhere.”

Congressman Seth Moulton ’01, a former Marine who served four tours in Iraq, earning dual master’s degrees from the Harvard Kennedy School and Harvard Business School between tours, talks about the importance of service and the impact his military training had on his career.

Faust, who over the past five years has spearheaded the return of ROTC to Harvard, noted that only a few weeks ago the University welcomed Air Force ROTC back to campus. In the 1970s, wide protests against the Vietnam War led the University to end military training on campus, a decision that held for nearly 40 years. In 2011, after Congress repealed the “Don’t Ask, Don’t Tell” ban on gay and lesbian service members, Harvard moved to bring back ROTC.

“Just this week we have seen powerful evidence of how that repeal has not only strengthened Harvard’s ties to the military, but it has strengthened the armed forces more generally,” said Faust. “Throughout our history, the military and the nation have grown stronger together as they have become more inclusive — of blacks, of women, of gays and lesbians.”

Joining Clarke as Army 2nd lieutenants were Charley Falletta, a government and economics concentrator who will attend the Armor Basic Officer Leaders Course at Fort Bennington, Ga., and Lucy Perkins, who is graduating with a master’s in urban planning from the Graduate School of Design. Perkins will attend the Military Intelligence Basic Officer Leaders Course in Fort Huachuca, Ariz., before joining the 450th Civil Affairs Battalion at Fort Meade, Maryland.

Zander Farrow, a government and economics concentrator with a focus on counterterrorism, was commissioned as a cadet in the Air Force. His first assignment is pilot training at Randolph Air Force Base in San Antonio.

As for Clarke, a government concentrator, he will attend the Quartermaster Basic Officer Leaders Course at Fort Lee, Va., before going to Fort Campbell, Kentucky, where he’ll join the 3rd Brigade Combat Team of the 101st Airborne Division.

He said he’s looking forward to a life of commitment, service, and learning.

“I want to learn, give back, and help people out,” he said.