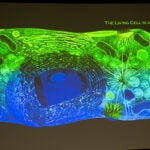 How our bodies harness energy

It is different this time for best-selling author Michael Pollan, and not just because his subject has changed. The people are different too. They’re not farming or fermenting or cooking. This time they’re dying.

Pollan’s books about food, diet, and industrial agriculture — he is perhaps best known for 2006’s “The Omnivore’s Dilemma: A Natural History of Four Meals” — have made him an influential voice in America’s food fight over obesity, nutrition, and diabetes, and have made him revered by those who believe that something is fundamentally wrong with how we mass produce and prepare our meals.

Yet Pollan’s books have always been about learning, he says, constituting a journey of exploration for him as well as for his readers. He attributes his success and influence in part to his ability to take others along with him, exploring the answers to questions that intrigue him and that the rest of us may not have even known to ask. Now, a new subject has caught his eye.

Pollan is exploring a budding rebirth of psychedelic drugs, all but banned since the 1960s. His latest work examines new research into the drugs’ potential therapeutic use, and the impact those trials have had on subjects, including those facing death from cancer.

Despite the success he’s already experienced, Pollan said in an interview that this work is forcing him to stretch as both a reporter and a writer. It’s taking him places he’s never before been — including on deep dives into others’ pain.

“This has been a different kind of reporting for me. Interviewing people with cancer diagnoses — who are thinking about death — and talking about death with them,” Pollan said. “I had a series of interviews … that wring you out emotionally.”

In addition to the challenges in reporting the book, Pollan said he’s being forced to grow professionally to describe the study subjects’ experiences — their “trips” — while on the drugs. Superficially, the flights of fancy can seem odd, he said, so the challenge is to describe them in a way that both is meaningful to the reader and does justice to the depth of the subjects’ experiences.

“I’ve tended to write about people in their capacity as professionals, whether a farmer or a scientist. That’s a very cool interview, basically, and practiced,” Pollan said. On this project, “I’ve had five or six interviews with people crying as they described these experiences. So I’m being stretched as a reporter and being stretched as a writer, which is great. That’s one of the reasons I wanted to do something different.”

Since September, Pollan has been the Suzanne Young Murray Fellow at Harvard’s Radcliffe Institute for Advanced Study, working out of a corner office in the institute’s Byerly Hall. Though he has appeared at some venues, on campus and off, he mostly has tried to keep a low profile and get some work done.

“My goal in coming here was really to lay low and do less and focus,” said Pollan, whose fellowship runs through the end of May and who spoke about his work to a packed house at Radcliffe’s Knafel Center in April. “I treated this a little bit more like a writer’s retreat, or I tried to.”

As part of the 2015–16 Fellows’ Presentation Series at the Radcliffe Institute for Advanced Study, Michael Pollan, the Suzanne Young Murray Fellow, delivered an autobiographical talk — “One Writer’s Trip” — about his thinking and writing on nature as we find it closer to home: the garden, the farm, the table, and most recently, the altered states of consciousness that certain plants and fungi allow us to achieve. These excerpts are from that talk.

The work has progressed well over the months here and is about a third complete, said Pollan, who is also a journalism professor at the University of California at Berkeley. It hasn’t hurt that Harvard is where the work of Timothy Leary and the Harvard Psilocybin Project became a national focus half a century ago for the emergence of and backlash against psychedelic drugs like LSD and psilocybin, the active ingredient in psychedelic mushrooms.

Pollan was disappointed that some of the archival material about that era remains sealed, but he recounted the delight of reading R. Gordon Wasson’s 1950s-era account, preserved in Harvard’s Botany Libraries, of taking hallucinogenic mushrooms in a Mexican Mazatec religious ceremony.

“His notebook records the first psilocybin trip ever taken by a Westerner,” Pollan said. “You can watch the handwriting disintegrate.”

Pollan’s book will tackle several topics, including the drugs’ history (there were a surprisingly large number of scientific studies in the ’50s and ’60s), the natural history of psilocybin mushrooms, and the current investigations by researchers at New York University and Johns Hopkins University into their use for palliative care. That work, in phase 2 trials, has demonstrated dramatic impact on the psychological trauma that often comes with cancer diagnoses, alleviating patients’ depression, fear, and anxiety. The trials also have shown potential in treating addiction.

Though Pollan is working on new topics, he isn’t walking away from his past work. His years of exploring different aspects of the food industry, the natural history of ingredients, diet, and cooking have made him an expert in the field and an advocate for changes in the system and in habits.

“I’ve taken a role in this national conversation, and to simply stop speaking because I’ve gotten interested in something else seems borderline irresponsible,” Pollan said. “I can speak more as an expert, which is fine for the political arena, but for me is not so fine as a writer. I don’t want to write a manifesto.”

Pollan expects to continue to speak out on food-related issues through television shows like the recent Netflix “Cooked” miniseries, through his Twitter feed, and through speaking engagements. It’s important, he said, that messages promoting food industry reform and healthy eating reach all aspects of society.

Assistant Clinical Professor of Law Emily Broad Leib, director of the Harvard Food Law and Policy Clinic, hosted Pollan in a private meeting with clinic students and in one of her classes afterward. Pollan answered questions and asked students about their own food-related projects.

Broad Leib credited Pollan with helping awaken the country to problems with the food system by explaining potentially dry topics like the intricacies of the U.S. farm bill in an easy-to-understand, engaging way. It’s telling, she said, that roughly three-fourths of student applicants to a Harvard food law summit last fall cited Pollan’s writing as influential.

“I think his influence has been enormous; it’s almost hard to overstate it,” Broad Leib said. “He has popularized the understanding and knowledge of these complicated topics.”

Richard Wrangham, the Ruth Moore Professor of Biological Anthropology, whose research on cooking’s importance to early humans has figured prominently in some of Pollan’s writing, appreciates that Pollan has gotten the science right. Wrangham hosted Pollan at a dinner with Currier House students in February.