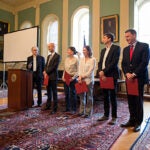 Though Harvard faculty members often garner accolades for their pioneering research, they are perhaps less often publically celebrated for their talents as teachers and mentors. In that spirit, each year a select group of them are named Harvard College Professors to recognize, in addition to their research activities, their excellence in undergraduate teaching and their important contributions to students.

Edgerley Family Dean of the  Faculty of Arts and Sciences Michael D. Smith has named as this year’s honorees David Charbonneau, professor of astronomy and astronomer at the Harvard-Smithsonian Center for Astrophysics; Marla Frederick, professor of African and African American Studies and the Study of Religion; Shigehisa Kuriyama, professor and chair of the Department of East Asian Languages and Civilizations, professor in the Department of History of Science, and Reischauer Institute Professor of Cultural History; Ann Pearson, Murray and Martha Ross Professor of Environmental Sciences; and Salil Vadhan, Vicky Joseph Professor of Computer Science and Applied Mathematics.

“The Faculty of Arts and Sciences values excellence in teaching and research, recognizing that they are mutually reinforcing,” says Smith. “In an educational environment like Harvard’s, where learning is happening well beyond the classroom alone, teaching and research are truly intertwined.”

The Harvard College Professorships began in 1997 with a gift from John and Frances Loeb. The five-year appointments provide faculty with extra support for research or scholarly activities, a semester of paid leave, or summer salary. The professorships are one of several efforts dedicated to highlighting exceptional teaching at Harvard.

Charbonneau’s research goals involve detecting and characterizing planets orbiting other stars, worlds known as exoplanets. These systems offer unparalleled opportunities to determine the properties of planets and their atmospheres.

Yet when it comes to teaching, Charbonneau is equally passionate about the atmosphere closer to home.

“My priority as a teacher has been to build our community of scholars, and in particular to increase the participation of women and members of under-represented groups,” Charbonneau says, decrying the “sexist and racist” environment that pervaded academia in the past, which he claims discouraged many budding scholars.

“I’ve tried to play a part in reversing this, which affects not just the way I teach a particular undergraduate course, but my research advising and the community-building activities we convene. When I learned I had been named a Harvard College Professor, the letter I received says it recognized ‘contributions to creating a positive influence in the culture of teaching in the Faculty of Arts and Sciences.’ If I’ve done that, even a little, then I’m encouraged to keep going.”

Charbonneau believes the strongest learning moments aren’t necessarily found inside the classroom, citing the unique opportunities Harvard undergraduates have to engage in cutting-edge research mentored one-on-one by a professor. These experiences are equally enriching for him.

“I recognize that many of my students are smarter and swifter than I am, and I delight in setting them on exciting opportunities and then scrambling to keep up as they unfold,” he says.

As an undergraduate at Spelman College, Marla Frederick recalls one of her mentors, Gloria Wade Gayles, beginning every new class with the same mantra: “Claim … your … space!”

“She wanted women students in particular at this historically black women’s college to know that the classroom is a place of open inquiry,” Frederick says. “I greatly appreciate her insistence because it has allowed me to ask questions and engage issues on a variety of subjects with a sense of entitlement to intellectual space.”

It is a teaching philosophy that serves Frederick well, particularly as an anthropologist focusing on religion, race, media, and culture in the United States. Students approach these subjects from such diverse perspectives, she says, it’s essential that the classroom be a safe setting for inquiry as well as a place to learn theoretical and analytical tools for processing those issues.

“Students often come to class with feelings about particular issues, but are unfamiliar with the historical and social contexts for the evolution of various religious practices or worldviews that concern them. The goal is to help them appreciate how these traditions emerge and the dynamic influence they have on our world.”

Frederick says the Harvard College Professorship will give her the opportunity to think of new, innovative ways to engage students across the University in active learning.

“I know that there are extraordinary professors at Harvard, so to be recognized for my teaching and contributions to the community in this context is quite an honor.”

Most teachers only dream of their students describing homework as a “creative activity” to which they’d “happily devote hours,” but language and cultural history professor Shigehisa Kuriyama says he’s figured out the key to making this his classroom’s reality. His secret? Banishing the essay.

“When I asked students to compose a podcast or movie in response to class readings, most invested far greater thought and effort into the assignment than they would, habitually, for a written essay. It was like magic,” he marveled.

When Kuriyama describes his approach to teaching, words like “joy,” “exhilarating,” and “inspiring” come up frequently. He challenges himself to infuse all of his classes with the same excitement often found when a student begins studying a new language.

“In a good language course,” he explains, “the student has a clear sense of progressive empowerment: With each passing week, signs and sounds that once were utterly foreign and baffling become personal and meaningful.

“The challenge that occupies me now is getting a course on, say, history, to be structured to echo the joy of progressing from ‘Bonjour, ça va?’ to reading the poetry of Verlaine.”

A member of the Department of Earth and Planetary Sciences (EPS), Ann Pearson’s research centers on understanding how and why organisms leave particular chemical signals in the geologic record. By examining microbial processes, her research yields insight about environmental conditions on Earth today, in the past, and projects potential human impacts on the future. This work leads Pearson and her students everywhere from western China to the deep sea.

“My department makes a strong commitment to experiential learning,” Pearson explained. “I firmly believe that cultivating dynamic interactions between students is as important as one-on-one contact with faculty, and taking students into a field is a great way to achieve this.”

To that end, every three years Pearson leads an oceanography field trip for EPS concentrators aboard a Sea Education Association sailing ship for the week before the academic year begins.

“It is a fantastic community-building exercise, in addition to introducing students to concepts of physical, chemical, biological, and geological oceanography — and we even throw in a bit of celestial navigation for good measure,” she says.

Pearson believes so strongly in the power of experiential learning, she hopes to use her Harvard College Professorship to work with colleagues both in and beyond Harvard to ensure that as many students as possible have access to hands-on learning experiences.

An expert in computational complexity theory and cryptography, Salil Vadhan is convinced that studying computer science is helpful for all students regardless of their concentration, because it exposes them to “an intriguing set of issues, giving a unique computational perspective on the world in which we live, and training them in mathematically rigorous thought.” But you won’t find him behind a podium.

“In recent years I have been gradually shifting away from a standard lecture format in order to make more effective use of classroom time,” he says. “While this format is more demanding of the students, I have found that it leads them to understand the material more deeply.”

As an adviser, Vadhan does not shy away from the time it takes for students to focus on their unique research interests, either. “For me, the value of research advising comes from the rewarding experience it provides me as an educator. As a consequence, I rarely assign projects to my advisees, and rather jointly work with them to find projects that match their interests and goals.”

Vadhan hasn’t yet firmed up his plans for his Harvard College Professorship, but may use the funds to convert some of his courses to an active learning format, in addition to developing a General Education course.

“For all faculty, there is a constantly shifting balance between teaching, research, and service in how we spend our time, and the Harvard College Professorship is a wonderful reminder of how important the teaching component is to me.”