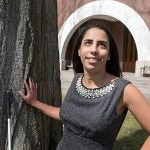 After making a second career of police work, Christos Hatzopoulos turned his inquisitive mind to history

Growing up in Boston’s Mission Hill neighborhood, Christos Hatzopoulos thought of himself as an average Joe. He wasn’t the type who would one day earn a master’s degree, much less at Harvard.

Yet this June, he will receive a master’s degree in history from the Harvard Extension School.

“I never thought of myself as a scholar, and I certainly never dreamed that one day I would study at Harvard. It’s been a very humbling experience,” he said.

For Hatzopoulos, embarking on graduate studies was the second big change in a life of big changes. After graduating from Northeastern University in 1980, he worked for Raytheon for 20 years in defense electronic manufacturing. He was a program manager for the Patriot Missile System during the first Gulf War, a high-profile assignment he found exciting. But several years later the company went through a series of layoffs, and suddenly Hatzopoulos was without a job.

Married, with two young children and a mortgage, he had to act quickly. An opportunity arose for him to attend the police academy. He was 42 and felt some “trepidation” about starting anything new. At the same time, “it was an opportunity to pursue a lifelong interest in law enforcement.”

Hatzopoulos completed his academy training and in 2000, he joined the Harvard University Police Department. “I was given a second chance on a second career that I should have had from the beginning,” he said.

He spent eight years on patrol before being promoted to detective. Working in law enforcement at an Ivy League institution is grittier than some might imagine, he said. It may be Harvard, “but basically, you’re out in the street and you’re handling situations, just like any police officer.” Many of those situations concern theft — cellphones, laptops, wallets, and bicycles. There are also accidents and occasional assaults.

“The training and experience get you through,” he said. “So you get more comfortable as time goes on, but you never get too comfortable.”

After success in a second career, Hatzopoulos embarked upon another challenge: a master’s degree in history, which he thinks is an “overlooked” field of study.

“History was never a dead science for me,” he said. “I’ve been reading history books my whole life for pleasure.” His mother is from Istanbul, and Hatzopoulos has always been interested in the Byzantine Empire. He focused on that at the Extension School, writing his master’s thesis on the study of conflicts between its emperors and patriarchs.

Hatzopoulos hopes his degree will lead to an opportunity to teach part-time at the college level, perhaps at a community or state college. As a teacher, he would like to inspire a love of history in students. “I’d like to point out to students that problems we deal with today were probably faced in one form or another in the past.”

Problem-solving comes naturally to Hatzopoulos, as his work in law enforcement and also as a scholar of history has demonstrated.

“Confucius said it best,” he said, “‘Study the past if you would define the future.’”