Doubling up at Harvard 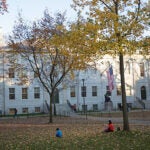 ‘Making Harvard a campus for all’

Twins have been written about and revered in mythology for centuries, going back to the fabled founding of Rome by Romulus and Remus, abandoned at birth and mothered by a wolf. Apollo and Artemis were twins born to Zeus, the mythic Greek king of the gods. And it was Greek mythology  that inspired the astronomer Ptolemy, who in the second century A.D. described 48 constellations of stars in the zodiac and named Gemini (Latin for “twins”) after the mythical twins Castor and Pollux.

Twins can be monozygotic (identical) or dizygotic (fraternal). Identical twins are derived from one fertilized egg that splits in two, and are always the same sex. They have similar facial features and the same DNA.

Fraternal twins are formed from two eggs, fertilized separately. They may be the same or different sexes, often look different, and share about half their DNA. The birth rate for identical twins remains constant throughout the world and appears to be unrelated to factors such as a mother’s age.

The birth rate for fraternal twins, by contrast, differs from country to country, and increases for older mothers as a result of fertility drugs and in vitro fertilization. The birth rate for twins in the United States between 1980 and 2009 rose 76 percent, and is currently at about one in 85 births.

Why do twins fascinate us so? On a visual level, the sight of two identical people is arresting, and has us scrutinizing them for distinguishing characteristics. We are used to a world of unique individuals, and our equilibrium is jarred by the mirror image of identical twins.

From an emotional standpoint, the closeness shared by most twins, begun by sharing a womb for nine months, is well known. Who wouldn’t want a sibling who is almost an extension of yourself, a constantly supportive person who reinforces your thoughts and feelings by confirming them in themselves? Intimacy, sharing, trust, and empathy, all values we admire, seem an intrinsic part of the twin experience.

From the 15 sets of twins currently enrolled as undergraduates at Harvard, Gazette photographers chose four sets to provide a window into the lives of this special segment of the student body.