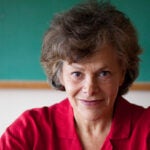 Irv, as he was known to all, played a major role in bringing evolutionary theory to the understanding of human behavior, using an unusually broad comparative framework including cross-cultural studies, nonhuman primates, and other mammals.

Irv grew up in East Texas in the town of Joy, the son of an itinerant Methodist preacher. The wild countryside instilled in him a love of exploration, fishing, wildlife, and archaeology. Although a confirmed non-believer, Irv’s charm, charisma, eloquence, and deep conviction surely owed more than a little to paternal influence.

Irv’s undergraduate major at the University of Texas was in social anthropology. He went on to pursue a Ph.D. in the subject at the University of Chicago, where he began studies initially under Sol Tax. However, his first experience of fieldwork (at the Mesquakie Indian Settlement in Iowa) convinced him that social anthropological research was not for him. Tax famously marched him “down the hall” to introduce him to Sherwood Washburn, a major figure in biological anthropology, primate studies, and human evolution.

Washburn was convinced that understanding the complex social behavior of non-human primates was essential to interpretations and reconstructions of human evolution, and he encouraged Irv to begin field studies of baboons in Kenya, which he did in 1959. This began Irv’s lifelong effort to use evolutionary theory to understand the complex behavior of highly social animals, including humans. He and Sherry Washburn formed an enduring friendship marked by productive collaborations and occasionally strong disputes over the extent to which natural selection shaped behavior for the greater benefit of individuals, as Irv insisted, or groups, as Washburn claimed.

Irv’s baboon work resulted in a series of publications, a highly influential edited volume on primate behavior, and an equally influential series of educational movies. It also stimulated many future field studies by his students. In 1960 Irv moved to Berkeley, joining Sherry Washburn and meeting there a new graduate student, Richard Lee. In 1963, Irv moved to Harvard as lecturer in the then Department of Social Relations, turning back to his original interest in humans.

Despite their relative youth, DeVore and Lee organized what became an extremely significant conference in 1966 on those humans still living a non-agricultural way of life, “Man the Hunter.” The resulting 1968 publication provoked new approaches to the study of foragers at a time when there were many more groups still in existence than today. It also catalyzed an integrative and collaborative long-term research study of Kalahari Bushmen, led by Irv and Richard Lee. This project brought together multiple flavors of anthropology and in so doing became a paradigm for multi-year and multidisciplinary projects. In Peter Ellison’s words, it “defied classification within the standard subfield taxonomy.” It also generated an impressive number of Ph.D. theses and books and as many academic careers. Irv initiated a second long-term field project in 1980 involving the Efe pygmies of the Ituri Forest in Zaïre, and this had a similar catalytic effect on scholarship and careers.

During the 1970s ,Irv began an intellectual engagement with the evolutionary biologist Robert Trivers. In 1972 Trivers had completed his Ph.D. under Ernst Mayr and then continued at Harvard as a faculty member in the Department of Organismic and Evolutionary Biology until 1978. Prior to 1975 Trivers developed several key concepts of evolutionary social theory concerning reciprocal altruism, sexual selection, parental investment, parent-offspring conflict, and more.

As Irv described in an Annual Reviews conversation interview with Peter Ellison, his engagement with and use of Trivers’ ideas entailed what he described as a “conversion experience.” His friendship with Trivers deeply affected how Irv thought about human behavior and how he taught it. In both the anthropological and biological communities at Harvard, the theory that Irv and Trivers advocated generated vigorous and sometimes rancorous arguments how about how best to think about human behavior. It is worth recalling however, that even at its height, Irv and Stephen Jay Gould, one of his most vocal intellectual opponents, would still join each other in all-night high-stakes poker games.

Irv was widely influential outside Harvard. With two colleagues, the psychologist Jerome Bruner and the filmmaker and visual anthropologist Asen Balikci, he developed social studies material for secondary school students aimed at an understanding of human societies. This was not without controversy. For many years he played a leading role on the science committee of an influential private foundation supporting research on evolutionary anthropology, the Leakey Foundation.

Above all, he will be remembered here as a caring teacher, mentor, and academic builder. He served as chair of the Department of Anthropology from 1987 to 1992 and as director of the Peabody Museum of Archaeology and Ethnology in 1996–1997. He referred to the emergent Human Evolutionary Biology department as “the apple of my eye.”

He most valued his role as teacher, not least in the enormously popular course on human behavior and evolution best known in the Core Curriculum as Science B-29 but popularly known among students as “Sex.” As Irv told a Boston Globe interviewer in 1997: “I teach by humor and shock. There’s no excuse for boring students when you’re talking about human nature.” He was funny, shocking, and entertaining. And students listened, learned, and came away with another perspective on themselves.

His teaching also included the famous “Simian Seminar,” a weekly evening gathering for an ever fluid grouping of graduate students, colleagues, and visitors at the rambling DeVore house in Cambridge. As Peter Ellison fondly remembers, the Simian Seminar “became a crucible of ideas that helped shape the development of what became known as sociobiology” and especially of the idea “that human behavior had been formatively shaped by natural selection.” This was Irven DeVore’s lasting contribution.

Irv’s wife of 58 years, Nancy, died in December 2014; their son, Greg, in 2003. He is survived by his daughter, Claire; her husband, Kevin Weick; and four grandchildren.