A new platform for discovering antibiotics 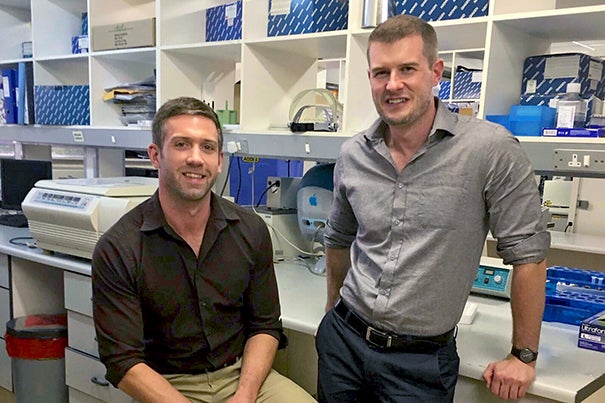 Harvard researchers have created a greatly simplified platform for discovering antibiotics that may help solve the rising crisis of resistance to such helpful drugs.

In a study just published in the journal Nature, Andrew G. Myers and colleagues describe “a platform where we assemble eight (chemical) building blocks by a simple process to make macrolide antibiotics” without using erythromycin, the original macrolide antibiotic, and the drug upon which all others in the class have been based since the early 1950s. Erythromycin, which was discovered in a soil sample from the Philippines in 1949, has been on the market as a drug since 1953.

“For 60 years, chemists have been very, very creative, finding clever ways to ‘decorate’ this molecule, making changes around its periphery to produce antibiotics that are safer, more effective, and overcome the resistance bacteria have developed,” said Myers, Amory Houghton Professor of Chemistry and Chemical Biology in Harvard’s Department of Chemistry and Chemical Biology. “That process is semisynthesis, modifying the naturally occurring substance.”

In contrast, the process described in the Nature study involves using “eight industrial chemicals, or substances derived from them,” Myers said, manipulating them in various combinations and then testing the products against panels of disease-causing bacteria. This allows for “new compounds in fewer steps than was previously possible.”

One thing that has complicated antibiotic development is federal agencies’ perceived reluctance to fund the research. In fact, Myers said, his new antibiotic development system would have been impossible without support from a Harvard alumnus and his wife who are interested in science, and Harvard’s Blavatnik Biomedical Accelerator.

“I was making a presentation to a group of visiting alumni interested in science, and one, Alastair Mactaggart, asked me about funding. I told him I had no funding, because at that time we didn’t, and he followed me back to my office and said, ‘This is ridiculous: We have to do something about this.’” Myers said that without the support of Mactaggart and his wife, Celine, and the Gustavus and Louise Pfeiffer Research Foundation, the new platform would not exist. “And the Blavatnik accelerator funding was also hugely important,” he added

The Blavatnik Biomedical Accelerator awarded funding to Myers’ project in 2013, enabling synthesis and testing of compounds. In 2015, with support from Harvard’s Office of Technology Development, Myers founded Macrolide Pharmaceuticals, which has licensed the synthesis platform and aims to commercialize novel antibiotics for serious infections.

“One of the things that’s quite encouraging about the data in our paper is that some of the structures we’ve made are active against clinical bacterial strains that are resistant to every known macrolide,” Myers said. In fact, he added, two of the 350 compounds reported on in the Nature paper have, in initial testing, shown efficacy against a bacterium that had become resistant to vancomycin, “which is known as the antibiotic of last resort. And if you have a bug that’s resistant to vancomycin, you’re in trouble,” Myers added.

“This is an early effort,” Myers said of his lab’s work with the new drug-development system. “We have a lot of work ahead of us.” Some of the 350 compounds reported on in the paper will undergo more extensive testing to evaluate their potential as candidate drugs.

Myers cautioned that the road from drug candidate to treatment at the bedside is long, arduous, and expensive. First comes the initial identification of possible compounds.

“Microbiologists evaluate those against panels of bacteria,” said Myers. “Hopefully your panels contain clinically relevant strains that are found in hospitals.” If an effective compound is found, it must be advanced. First researchers make sure it’s not toxic to human cells in the lab; then they see how stable it is in human plasma; next come animal studies, typically in rodents to see if it can cure infection. And then come the three phases of human studies.

“I said to a friend the other day that I’m really pleased this paper is out,” Myers said. “My students worked unbelievably hard to make this happen. But if this is where this ends, I won’t be satisfied. Our objective from day one was to have a drug in the clinic.”