A mother and son at trails’ end 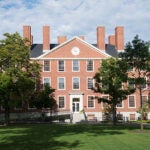 From around the world and across Harvard

Harvard’s Commencement on May 26 will be twice as meaningful for Jane Brown when she shares the milestone with her son Harry Stone.

Stone will receive an S.B. degree in environmental science and engineering from the John A. Paulson School of Engineering and Applied Sciences, while Brown will be presented an M.P.H. degree from the Harvard T.H. Chan School of Public Health.

Brown wrestled with the decision to go back to school. She earned her undergraduate degree from MIT in 1977, graduated from Harvard Medical School (HMS) in 1983, completed a residency program at Boston Children’s Hospital, and spent the next 30 years as a practicing pediatrician in her hometown of Needham, Mass.

With a rewarding career and busy family life, including four children, returning to college was the furthest thing from her mind.

But as the years passed, the idea of pursuing a public health degree grew on her. She had a watershed moment on a medical mission to Vietnam.

“I just felt like what I was doing on these medical missions was more of a Band-Aid. I was seeing patients, and I was taking care of a few people, but I wondered if I could do more than that,” she said.

So Brown applied — in secret — to the Harvard Chan School.

At the same time, her son was deciding on college. Stone said he felt a bit of tug-of-war as he narrowed his choice to the two Cambridge institutions his mother and father had attended as undergraduates: MIT and Harvard, respectively.

He chose Harvard so he could experience the variety of a liberal arts education while concentrating in environmental engineering.

“I was inspired by big public works projects like the Hoover Dam and Panama Canal. Engineers are involved in a lot of amazing projects and have the opportunity to do a lot of good for humanity,” Stone said.

When his mother announced she would be joining him at Harvard, “I thought it was cool that she was coming back to school, but I also thought she was a little bit crazy, because college is a different place today than when she was a student,” he said. “I knew there would be some unique challenges for her.”

“I thought I learned a lot when I was a student the first time,” said Brown, most of whose classmates were in their 20s. “Now there is this massive amount of information available at your fingertips, but it takes even more time to sift through it and determine what is relevant. I’ve learned to be a critical thinker in a different way.”

Mother and son both recall the first time they bumped into each other on campus; it was a surprise meeting in a stairwell that, while brief, was also slightly awkward.

Over the next three years, as they shared experiences, swapped stories about tests and projects, and offered academic advice, they began looking forward to their occasional on-campus encounters.

“We’re very different,” Stone said. “She’s so excited about every opportunity, while sometimes I end up sleeping through the first 10 minutes of my morning classes. But it has been inspiring to see her go through school. I’ve realized that I’ve taken it for granted in some ways.”

Stone is eager to begin work in environmental remediation for a local engineering firm. For Brown, who has loved being a student again, the approach of Commencement is bittersweet.

While she hasn’t mapped out the next chapter of her professional career, she knows her public health training will inform her work in what is a rapidly changing global health care environment. Right now, she is excited for her son’s bright future.

“I’m happy for Harry. I’m very happy with the decisions that he’s made and I’m confident in him for the future,” she said.

Stone has learned from his mother to keep an open mind about education. Thinking about the future, he is considering training that would enable him to tackle environmental problems that have global public health impacts.

“It’s funny how our paths have kind of become intertwined,” he said. “I’m happy for her too. It’s a great story to tell people, and an inspiring one.”