Taking his thesis on the road 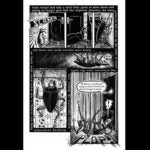 How does a 1,000-mile bike ride through the Mexican desert translate into a thesis at the Harvard Graduate School of Design? For Michael Meo, it’s about architecture as experience.

“My passion has always been participatory design, basically designing processes to bring people into the process of creating design change,” said Meo, a tall, athletic California native who will graduate in May with a master’s degree in architecture.

Like many GSD students, Meo has designed numerous buildings during his time at Harvard. But when it came to his defining project he longed to create something else, something “real, and complicated, and messy.” And mobile. His vision “involved all the rigor of any building production you’d see [at the GSD], but with this sticky, messy, social complexity.”

For almost three weeks, from the end of 2015 into 2016, Meo led 22 cyclists on a grueling trek the length of the Baja California Peninsula in Mexico. The riders, ranging in age from 12 to 55, formed an eclectic group; some were deaf, some were blind, some were amputees. They logged close to 100 miles a day, camped along the route, and pushed the limits of their physical abilities.

They also helped Meo push the definition of architect.

“As a designer I like to step back and think about solutions because sometimes you don’t have to build a building. Sometimes it’s crafting a story, it’s reframing a problem, it’s designing a system, it’s designing a toolset, it’s enabling an experience.”

The thesis, captured in a documentary set to screen at 8 p.m. Wednesday at Lowell Lecture Hall, built on a project Meo carried out last year with grant support from the GSD’s Mexican Cities Initiative and the David Rockefeller Center for Latin American Studies. That work explored the “bike as a tool of urban resilience in Mexico City,” said Meo, who, with his research partner, GSD student Carlos Hernández-Tellez, studied how people in one of the densest cities of the world were using their bikes as a means of “surviving and thriving.”

To find their subjects, the pair simply started pedaling.

“As a researcher, it’s really important that you immerse yourself in the daily life of the subject,” said Meo. “It’s not just about participatory observation, it’s about participating directly.”

Michael Meo, who will graduate from the Harvard Graduate School of Design in May, led 22 people — ranging in age from 12 to 55 — on a grueling trek through the Mexican desert. The ride became Meo’s thesis. He has produced a documentary film that follows the story of the 1,000-mile experimental bicycle journey.

Riding with backpacks crammed with mapping gear, cameras, and notebooks, Meo and Hernández-Tellez crisscrossed the city for eight to 10 hours a day, interviewing any cyclist willing to talk: a hipster on a bike worth thousands; a kid who fished his ride from a dumpster; the head of Mexico City’s bike-share program; delivery workers, mechanics, and commuters. Each encounter led to new introductions, and a wider network.

When it was time to head back to Harvard, Meo knew his work wasn’t finished. Instead of planning a building, he wanted to craft his thesis around a cycling experience, and for people from all walks of life. In a way, he was picking up where his younger self had left off, 10 years before.

A shy kid from a San Francisco suburb, Meo had his first taste of independence at 12 when his parents let him bike the 8-mile route to school. In that moment, cycling became his “way of perceiving the world.”

That perspective deepened on the first of many long-distance treks. After graduating from high school, Meo put an ad on Craigslist for a one-way ride to Canada. When some local punk rockers responded, Meo threw his bike and his backpack into their touring van, recently purchased from the California state prison system, and rode along. The journey lasted to Washington State, where Meo hopped out on the side of the road and started the long ride home. During that 800-mile coastal trek, something clicked.

“I felt the transformative nature of the bike,” he said, “the ability that it has to transform your perception of accessibility and scale and distance and obviously mobility.”

So last summer, with that life-changing trip in mind, Meo stayed in Mexico City and started building.

“When I say this was very much an architected project, the first component of the design was really designing the group,” he said, “building the network of the group, building trust.”

Meo gained the trust of the parents and grandparents of Israel, a 12-year-old who had never journeyed beyond the streets of Mexico City. He assured Jose Luis, a 33-year-old missing his right leg, that on a tandem bike he could tackle the challenging terrain. He encouraged Marta, a 55-year-old blind rider who had never been camping, to make the trip.

Next came the design of a series of activities that would “catalyze empathy,” said Meo, “and build these bridges” among riders.

The group spent New Year’s Eve blindfolded in an effort to gain some small insight into Marta’s life. It was a success. “Their way of perceiving the world, their way of interacting with Marta was totally transformed, said Meo, “because they harbored this new personal awareness.”

Meo’s own awareness grew, too. Paired with Marta, he began to understand how his eyesight was hampering his ability to “see sounds in other ways,” such as how Marta one day heard wind whipping the long grass on the side of the road and asked if there was a stream nearby.

In his thesis defense, Meo will have to set out the analytical and theoretical framework for the project and explain to a jury of experts why precisely his work is happening in a school of architecture. He isn’t worried. His research, he said, intersects issues architects face daily, such as perception, the social construction of space, and architectural process.

Mark Mulligan, an associate professor in the practice of architecture and Meo’s thesis adviser, admits that initially he wasn’t sure how the project would “dovetail into the requirements of an architectural thesis.” But the more he heard, the more clear it became that Meo was “thinking about a different foundation for architecture.”

“I’ve advised many architectural thesis projects that end up producing buildings, that end up producing floor plans, elevations, facades, and theoretical tracks on how architecture impacts society,” said Mulligan. “But I don’t think I’ve ever heard anybody really quite so squarely put the idea of building a communal space … without necessarily bringing construction materials to any particular site.”

Does Meo’s adventure represent a new paradigm for GSD thesis projects? Unlikely, said Mulligan. But it does reflect a renewed desire among students and administrators to explore the social relevance of their work.

It also reflects something Mulligan considers fundamental to any thesis: passion.

“You can hear in [Meo’s] passion for the project and the experiments he undertook how excited he was about it,” said Mulligan. “At the same time it’s not enough that he was excited about it. He wants to share that excitement, he wants to inspire other people to think through different kinds of lenses.”

Located at 17 Kirkland Street, the Lowell Lecture Hall screening on April 27 at 8 p.m. is free and open to the public.