She followed her star 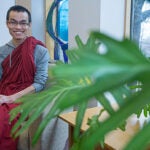 A monk with one foot in the world

Moiya McTier ’16, who grew up in a cabin, now peers through distant space

In March, the Harvard senior was finishing up a senior thesis for her unusual dual concentration: astrophysics and folklore and mythology. To bridge the chasm between the disciplines through her thesis, the Pennsylvania native decided to write a 60,000-word science fiction novel set on a planet she had studied in her astronomy research.

In July, she started writing, setting the novel in a rocky planet circling an M dwarf star 600 light-years away from Earth that had been detected by the Kepler Space Telescope. She handed in the first draft after a flurry of writing in February. In March, she checked to see whether more recent data could tell her anything new about the planet to incorporate into her next draft.

The star, she determined, is not the typical M dwarf, and its characteristics mean that the planet is likely bigger, orbits closer, and is four to five times hotter than Earth. It’s also probably gassy instead of rocky. In short, it’s a bad place for a story set on an Earthlike planet.

That sent McTier scurrying back to the drawing board. But instead of a wholesale rewrite, she fell back on the fact that most M dwarfs have three to five planets, so it’s likely this star does too. She made one of those, a rocky one in the star’s habitable zone, her novel’s home.

“We picked this system because we thought [the planet] was habitable, an Earth-sized planet with liquid water,” McTier said. “None of that was true.”

McTier, who lives in Mather House, turned in the thesis in early April with both a sigh of relief and a pang of emptiness at finishing something that had consumed her for so long. She isn’t done with it, though. She plans to continue working on the novel and eventually look for a publisher.

Astronomy Professor John Johnson, McTier’s undergraduate adviser, said that, unlike students focused on science to the exclusion of other topics, McTier has broader interests and understands that science is nested within a broader perspective.

“Moiya is multitalented. She’s the quintessential Harvard student in that she has more than one interest,” Johnson said. “She’s very much interested in being a world-class leader in science and [understands] that science falls within society.”

The combination of passions evident in her dual concentration is unusual, but then McTier was brought up on the unusual.

She was raised in rural southwestern Pennsylvania in a cabin with no running water and no central heat, on 23 wooded acres. She was raised by her mother, an English professor at Waynesburg University, and her stepfather, who also taught and who was committed to living simply.

After spending her early years in urban Pittsburgh, however, McTier didn’t share that commitment. She moved to the cabin with her mother when she was in second grade and never really took to life there.

“I was a really angry teenager,” McTier said.

McTier came to Harvard intending to study physics, but didn’t enjoy her first physics class. She became interested in folklore and mythology, but at her mother’s urging, she agreed to give science another try. A friend got her to take an astronomy course, and she was hooked. For a while, she wrestled with which of the two concentrations to choose, but eventually gave up and decided to do both.

Work on the two concentrations kept McTier busy, but not too busy to play rugby for three years and enjoy time with her friends. Those friends, she said, kept her going when she struggled enough during her freshman year that she briefly considered going home and maybe even working in a coal mine.

After graduation, McTier plans to take a little time off and then move to New York City, where she will start graduate school in astrophysics at Columbia University in the fall. She is still interested in space habitability, but plans to examine it on a large scale. She wants to investigate whether the galaxy itself has habitable zones, regions where finding stars with habitable planets is more likely.

Looking back at her time at Harvard, McTier said her first year was one of serious culture shock. She’d skipped a grade and arrived at 17, not even able to open a bank account. But she’s glad she stayed — life would be very different if she’d remained in Greene County — and offered incoming freshmen a lesson: Take your own advice when thinking about the path ahead.

“You didn’t come to one of the best universities in the world to do what everyone else is doing,” McTier said. “Make your own path. You do you.”