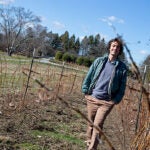 Harvard conference focuses on achievements of Native Americans, long dominant in the sport

It happened 80 years ago this Patriots Day. Ellison Brown, a Narragansett from Rhode Island, began to lose steam as he raced up Newton’s hills — the leg of the Boston Marathon course that dashes so many hopes. Back in second place, Johnny Kelley had trailed the frontrunner for three miles, but now he smelled blood. Kelley closed a half-mile gap down to a few yards. At the top of the last and highest hill, Kelley passed Brown, giving him a pat on the back as he did so.

Kelley later said the gesture was intended to be friendly, but Brown bristled. “Maybe he thought he was going to go by, but I didn’t,” Brown would say. Rather than fading further, Brown, whose nickname was “Tarzan,” regained his strength and sailed past Kelley, the latter’s hard-fought gains all in vain. After that, sportswriters nicknamed that stretch of Commonwealth Avenue “Heartbreak Hill.”

Brown held on for the victory that day in 1936. “It delighted the crowd thronging the sidewalks,” wrote the Boston Globe, “to see a copper-skinned, 100 percent American [win] the race. He triumphed in the very oldest sport, and he did it in a way to bring credit on the original proprietors of New England.”

Though Brown was one of the best — he also competed in that year’s Olympics and won the Boston Marathon again in 1939, in the then-record time of 2:28:51 — he was far from the only Native American to stand out in the early annals of competitive running.

To honor and perpetuate that tradition, Harvard’s Peabody Museum of Archaeology and Ethnology is joining forces with the Boston Athletic Association (BAA) this weekend for “Native American Running: Culture, Health, Sport.” Beginning Friday at 1:30 p.m. at the Science Center, the conference gathers athletes and experts such as Billy Mills, the Oglala Lakota Sioux who won the 1964 Olympic gold medal in the 10,000-meter event, for discussions on the past, present, and future of Native American running.

Pride of the Penobscot

In recent years, the Tarahumara of Mexico’s Copper Canyons region have received attention for their running prowess, and rightly so. The tribe’s Arnulfo Quimare, winner of many ultramarathons, will speak at the conference, as will Harvard alumnus Christopher McDougall ’85, whose book about the Tarahumara, “Born to Run,” helped spread awareness of their feats and inspired readers to run.

Yet there is so much more to the story of indigenous runners, Lieberman said in an interview. Running-centered traditions abound, he said, “from the Arctic all the way down to the tip of South America.”

To take one example close to home, 1912 Olympian Andrew Sockalexis came from the Penobscot Nation in Maine. His reservation encompassed a portion of the tribe’s ancestral lands along the Penobscot River, where his father once hunted in the traditional manner, said Dale Lolar, a Penobscot and a relative of Sockalexis. “He would run down game, deer. That was his job. He would run them down, disable them, kill them, and somebody else would deal with the carcass.” That meat would feed the tribe throughout the winter.

Inheriting his father’s strong legs and lungs, the young Sockalexis won Penobscot foot races and entered his first Boston Marathon in 1911, finishing 17th. He joined the prestigious North Dorchester (Mass.) Athletic Association, which counted the great Clarence DeMar as a member. In 1912, he ran Boston again. This time, he led the pack for eight miles before being passed by Mike Ryan, who — pushed until the finish by the persistent Sockalexis — won in the record time of 2:21:18. (The course then was about 25 miles, not to be standardized at 26.2 miles until the 1920s.) Sockalexis finished 34 seconds later. Both men went on to compete in that summer’s Olympics at Stockholm — along with Lewis Tewanima of the Hopi Nation.

Sockalexis finished a close second at Boston again in 1913. Sadly, he died of tuberculosis in 1919, at age 27. Lolar will run the marathon on Monday in his honor. Another relative, Chris Sockalexis, the Penobscot tribal historic-preservation officer (and a onetime Junior Olympics cross-country runner), will speak at the Harvard conference.

It’s no surprise that an elite Native American runner would come from a hunting heritage. Lieberman’s research suggests that we humans evolved our unique endurance running ability millions of years ago, in order to race prey to exhaustion, just as Sockalexis’ father did in the 19th century.

The same trait allowed a young Tom Longboat, an Onondaga from the Six Nations Reserve in Ontario, to beat horses in races of more than two miles. (He would have lost shorter races, because horses are natural sprinters.) Longboat went on to win the Boston Marathon in 1907 in 2:24:24, smashing the previous record by more than five minutes, and to compete in the Olympics at London in 1908.

However, Lieberman stressed that the significance of running goes beyond hunting in native cultures. Footraces have long been featured in ceremonies, he said, “important to cementing ties, to redistributing crops and goods, to celebrating important events. … The diversity of traditions is staggering. The common theme, though, is the role of running in community events.”

In a sense, said Lieberman, the Boston Marathon, while a newer community event (run annually since 1897), is part of a long and ancient tradition of communal celebration — and cooperation. Runners raise millions of dollars a year for charities through their participation in the race. “Why are people running 26.2 miles for charity?” Lieberman said. “I think it’s because we’ve always run to help each other. Back in the old days, people ran to hunt, for security, to ensure the rains, for ritual. But running has always been a communal activity about helping each other, and I don’t think that today’s marathon movement is any different.”

Getting out there and running

Lolar, for example, has run marathons to raise funds for the Penobscot River Restoration Project. He has also helped people more directly. In his work as a substance abuse counselor, he’s been involved in efforts to encourage Penobscot youth to take up running and other sports.

That need to boost young Native Americans’ self-esteem and get them outdoors and moving is a raison d’être for this weekend’s conference. “We didn’t have to compete against Xbox and PlayStation in the ’70s and ’80s,” said Chris Sockalexis, about being a young runner in the Andrew Sockalexis Track Club. “The heartbeat of the ASTC is still there,” added Sockalexis, whose former teammates are coaching kids in running, basketball, hockey, canoeing — “whatever they want to achieve in.”

He said those of his own generation often point to Andrew Sockalexis’ achievements when telling teens, “Don’t give up.”

“A lot of youth today seem to try something new and give up on it. We’re challenging them to keep going, to be inspired by Andrew as well as our traditional basket-makers, our singers, our dancers. They should know that running is a part of our culture, and it always has been.”

Presented by the Peabody in collaboration with the BAA, the Harvard University Native American Program, the Office of the Provost, and the Radcliffe Institute for Advanced Study, the conference continues on Saturday at the John Hancock Sports & Fitness Expo at the Hynes Convention Center. All events are free and open to the public.