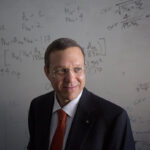 In the digital age, computing fuels some of the fastest-growing segments of the economy, making programming an increasingly important part of an American education. But the words “computer literacy” do not exactly excite the imaginations of most grade schoolers. So how to engage young minds with coding?

“Right now, coding is taught at a computer keyboard. It’s an abstract process that doesn’t have a relationship to the real world,” said Raphael Cherney, a research associate at the institute. “What Root does is bring coding to life in an extremely fun and approachable way. Kids with no experience in coding can be programming robots in a matter of minutes.”

Fitting somewhere between old-time remote-controlled toy trains and today’s video games, Root is a robot that is programmed using a tablet interface called Square. Root has light and color sensors, bumpers, and a touch surface that enable it to respond to the physical world. In a classroom setting, Root would “drive” along a magnetic dry-erase whiteboard at the front of the class, giving the young programmers an “instant, physical manifestation” of the code, according to Zivthan Dubrovsky, who leads the robotics platform at Wyss.

Meet Root: The Robot that Brings Coding to Life

Recognizing the pressing need for young students to be digitally literate and the remarkable educational power of robots, a team at the Wyss Institute for Biologically Inspired Engineering has developed Root, a coding robot that will engage students at an early age and guide the growth of their coding skills. Credit: Wyss Institute

The six-sided robot, roughly the diameter of a mouse pad, is “an approachable product with a very clear mission — to teach kids how to code,” said Dubrovsky.

The Wyss is a cross-disciplinary research institute that focuses on developing “bioinspired” devices for use in health care, manufacturing, robotics, energy, and sustainable architecture. The idea is to make the devices user-friendly, intuitive, and visual.

Root’s hardware is the same from kindergarten to college, but the interface is sophisticated enough that it allows students to program at different levels of proficiency, from a blocks-based graphical environment designed for beginners and early elementary school students to a traditional, text-based environment for older students or intermediate coders. Root includes a feature that lets users toggle between any of the levels, thus helping support the transition to more advanced concepts and coding processes, ultimately leading to work on Java Script.

Young children may not intuitively understand coding, but they do understand consequences framed by “if” statements: If this is true, then that happens. The tablet that programs Root features an interface that lets children build strings of “if” statements by moving icons around with their fingertips. The emphasis with Root, especially at the beginning, is not on coding but on problem-solving and pragmatic thinking, said Dubrovsky.

The device has been tested extensively by children, some as young as 5. “It didn’t feel like learning or work to them; it felt like fun,” Cherney recalled.

The Wyss team is currently seeking the right partners to help put Root into action in a classroom. The next step, said Dubrovsky, is to develop a curriculum, including a coding module, around Root.

Dubrovsky, who has three young daughters who have tested the robot, says he’s “over the moon about the project.”

“We’re in the digital world, but schools don’t teach coding. America needs computer programmers to be competitive — 71 percent of new jobs in STEM are going to be centered around coding. If we can solve this problem, this will be a big step forward for our country.”

A video featuring grade-school-age children interacting with Root was made to introduce the product. When filming, “We didn’t know what to expect. We didn’t even know if they’d smile,” said Cherney. “Seeing the students light up working with the robot was really, really cool.”

For more information about the project, visit the Wyss website.