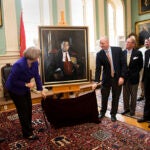 Lifted up into history

Alumna returns to address graduating seniors on May 25

Rashida Jones ’97, whose professional acting career began the year she graduated from Harvard College, returns to campus on May 25 to address the graduating Class of 2016 as part of the annual Class Day celebration.

Accepting the invitation, Jones said, “I am truly honored to come back to campus and speak at Class Day 2016. Harvard was such a transformative place for me in so many ways.

“It’s where I first had the idea for Facebook, which went on to make me billions of dollars and change the world. Oh, wait, that wasn’t me …,” she added, with tongue firmly planted in cheek.

Jones is known for her roles in more than 20 films, iconic TV shows such as “The Office” and “Parks and Recreation,” and, most recently, as the title character in the TBS comedy “Angie Tribeca.” She is also an accomplished screenwriter, philanthropist, and comic book author.

“As a Harvard College alumna, Jones knows what it is like to balance commitments — whether it was her involvement with the Harvard-Radcliffe Dramatic Club, the Signet Society, or the Black Students Association — with academics and the many other facets of college life,” said Class Marshal Gabriela Ruiz-Colon ’16, co-chair of the speaker selection committee. “She has taken this experience and shown an extraordinary ability to use her celebrity platform to make the world a better place.”

“We are thrilled to honor Ms. Rashida Jones. Both as a Harvard College alumna and as a woman of color in Hollywood, Ms. Jones serves as an inspiring role model for the Class of 2016, and we are looking forward to hearing from her,” added Marshal Irfan Mahmud ’16, co-chair of the speaker selection committee.

Harvard College seniors have invited a guest speaker for Class Day since 1968. Prior to that, the honor was given to University affiliates, such as deans, faculty, or classmates. The first invited guest was Martin Luther King Jr., who accepted the invitation shortly before his assassination. His wife, Coretta Scott King, delivered the speech in his absence and also became the first woman to give a Class Day address at Harvard.

Since 1968, nine alumni have been selected to deliver the Class Day address. Jones is the fourth consecutive alumna to give the address and also the first relative of a former Class Day speaker (Quincy Jones, in 1997) to receive the honor.

“We’re looking forward to gathering the entire Class of 2016 together for the first time since freshman year,” said First Marshal Reylon Yount ’16. “Class Day will be an exciting moment for us to reflect together on what it has meant to exist on this campus for four transformative years and how this experience will shape the rest of our lives.”

In addition to Jones’ address, Class Day events include award presentations and student orations. All of the day’s events will take place in Tercentenary Theatre in Harvard Yard beginning at 2 p.m. and will be streamed live online.