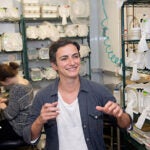 A startup launched by Harvard-trained researchers is taking on the “silent” infections and reproductive disorders that can threaten women’s fertility over time.

Without knowing it, many women live with conditions such as endometriosis, polycystic ovarian syndrome, ovarian cancer, uterine fibroids, or treatable infections such as chlamydia or gonorrhea. Left unaddressed, these problems can do significant damage to fertility, and some women who are hoping to conceive find that the window of opportunity has already closed.

“It shouldn’t be like this,” said Ridhi Tariyal, M.B.A. ’09, co-founder of a new medical technology company with former Harvard researcher Stephen Gire. These two scientist-entrepreneurs, close friends since their time in an infectious-disease lab at Harvard, are on a mission to get actionable health information into women’s hands before it’s too late.

Their vision? A smart tampon system that can detect the warning signs in menstrual blood.

Together, Tariyal and Gire founded NextGen Jane, a startup based on diagnostic technology developed at Harvard that will enter a clinical trial this spring. The company’s name is intended to evoke both the iconic strength of G.I. Jane and the vulnerability of a Jane Doe, as well as the founders’ modern, “next-generation” sensibilities.

Of course, they’re battling a taboo: Sexually transmitted infections, menstruation, and fertility problems are not entirely trendy topics. Quantified self-knowledge, on the other hand, certainly is. As Tariyal and Gire are quick to point out, curious technophiles want to review their genomes online, track steps taken and calories burned, post maps of their jogging routes to Facebook, or discuss their sleep cycles over a morning cup of coffee.

“The amazing thing about the ‘quantified self’ is that it’s talked about,” said Gire. “If you can do that with reproductive health and get it to the point where people talk about it at work or over cocktails, then it reduces the stigma, allowing women to be more proactive.”

Recently emboldened by closing a seed round of funding led by Patricia Benet, M.B.A. ’89, working with Access Industries, Tariyal and Gire are integrating user-friendly diagnostic technology into a routine that many women cannot avoid, leveraging a sample type that is often overlooked.

“The intent,” Tariyal says, “is to help you manage your health, from menarche to menopause.”

Health care in the field

Tariyal and Gire’s early experiences at Harvard set them up well to take on ambitious, impact-driven health care projects. They first met in the lab of Associate Professor Pardis Sabeti, who studies deadly infectious diseases such as Ebola, cholera, and malaria in Harvard’s Center for Systems Biology and at the Broad Institute of MIT and Harvard.

Gire had started out at MIT’s Whitehead Institute for Biomedical Research, studying monkeypox in the Congo, until his advisor there was suddenly accepted into NASA’s astronaut-training program. Sabeti had been a longtime collaborator, so Gire moved into her Harvard lab and remained there for seven years, heading up genomic initiatives in Nigeria, Sierra Leone, and Ghana.

Tariyal’s background was in industrial engineering, biomedical enterprise, and business. When she joined the Sabeti lab in 2011, the research team was expanding its efforts to understand the virus that causes Lassa fever. They had a hypothesis that a single gene might confer immunity to certain West African populations.

Pairing up, Tariyal and Gire designed a research study. For seven weeks, they backpacked through Sierra Leone, contacting patients who had survived Lassa fever and collecting venous blood samples. Camping outside while on the road, they traveled from village to village, trying to follow up with families who had moved, steering clear of outbreaks, and extracting themselves from scenes of political unrest (2012 was an election year). If they could carry the samples back to the lab quickly and safely, the blood could be sent to Cambridge for genomic analysis.

“We went into it thinking we’ll either be best friends or we’ll hate each other after this experience,” said Gire.

The project cemented their friendship.

In 2013, when the Lassa fever project was moving into a more analytical stage, Tariyal found herself at a transition point. She was 33 at the time.

“It’s hard to understand what to do if you don’t have kids, and you’re still pursuing a career,” she explained. “There aren’t actually really clear guideposts. How should you make a decision about having a child? How should you make a decision about freezing your eggs? When? What information can anyone tell me [about] whether I should drop everything and have a kid now or wait two more years?”

She sought advice from her physician but was denied fertility testing, in part, she said, because insurance would not cover the cost unless she had tried and failed to conceive. “It was clear to me then that our health care system was a reactive paradigm. If you don’t have a clear-cut problem, doctors don’t really know what to do with you or what to tell you. I really thought women should have information that’s theirs — without going to a doctor and without having a random arbiter decide whether they were ready to have this data.”

As that conviction grew, Tariyal departed the Sabeti lab and found her next opportunity, at Harvard’s Blavatnik Fellowship in Life Science Entrepreneurship.

The Blavatnik Fellowship, led by Vicki Sato, professor of management practice at Harvard Business School (HBS), invites recent M.B.A. graduates back to campus to engage in the commercialization of Harvard technologies, particularly those receiving accelerator funding through Harvard’s Office of Technology Development (OTD).

Tariyal had attempted to launch a startup once before, a genomics company targeted toward emerging markets. “It takes about two years to get over startup failure,” she said. “After a while, you brush yourself off.”

The Blavatnik Fellowship, said Sato, is “designed to rally resources around these young entrepreneurs who have incredible business talent and potential, and great passion for science and technology. You can’t launch a company in isolation. We provide them mentoring, space, and immersion in labs at Harvard and elsewhere as they contribute their entrepreneurial business skills to research projects that could become new ventures.”

Curtis Keith, chief scientific officer for the Blavatnik Biomedical Accelerator, met with Tariyal at the Harvard Innovation Labs one Sunday afternoon to discuss her interests, as he does with each of the Blavatnik Fellows.

“She was completely different,” Keith recalled. “She knew exactly what she wanted to do with her life. It wasn’t just the [women’s health] idea itself. I thought, ‘There’s something special about her.’ She was very confident.”

Under the Blavatnik Fellowship program, Tariyal approached George Whitesides, Woodford L. and Ann A. Flowers University Professor in the Department of Chemistry and Chemical Biology. Whitesides, who holds at least 130 patents, has many years’ experience developing point-of-care medical diagnostics, including a blood test for sickle-cell disease.

In his lab, Tariyal worked with doctoral students and postdocs to investigate the presence of various hormones and biomarkers in bodily fluids. Saliva and urine were standard samples, but many of the key biomarkers could only be found in blood, and blood from a “finger stick” did not provide enough material to build a robust product.

“We had to make it easy. We needed a way to collect lots of blood, and preferably at home,” Tariyal says.

So they got creative.

“I had this epiphany. If we need large amounts of blood from women on a regular basis — well, they bleed every month. It just didn’t occur to us initially, because it’s something women typically dread. You’re in pain, you feel bloated, so you don’t really think of it as an opportunity,” Tariyal explained. “But it’s such a rich biological matrix that you’re shedding every single month.”

Harvard OTD helped Tariyal protect the intellectual property that arose from her work during the Blavatnik Fellowship, covering the costs of patent filing. Assisting in the launch of NextGen Jane, they introduced her to a wide network of entrepreneurs and potential investors.

Tariyal also credits Sato’s mentorship for a host of lessons learned, ranging from understanding the business of science to becoming an effective female leader.

“Her door was always open to me,” Tariyal said. “She sets a great example of how to motivate others, how to build a strong team, and when to trust your gut.”

That support proved especially crucial when prospective investors expressed discomfort with the tampon concept. “She understood the nuance required to pitch a deck about stigmatized issues in health care,” said Tariyal, “and showed me how to move forward with grace and humor.”

By the end of the fellowship, the idea had grown. It was no longer about aging out of fertility, but had evolved into a “sentinel” system for health issues that affect fertility. “It played out even better than I expected,” Tariyal said. “It ended up being a much more ambitious idea because of the resources that the fellowship provided me.”

Gire, meanwhile, had remained in the Sabeti lab during the Ebola outbreak in West Africa, collecting samples in Sierra Leone and performing genomic analyses. His genomic sequencing experience would prove invaluable in the next phase.

The duo are now devoted to NextGen Jane full-time, and the company’s core technology — a system for extracting blood from a tampon, detecting key biomarkers, and expressing the results in digital form — is making rapid progress.

In 2015, a grant from the sequencing company Illumina Inc. enabled Tariyal and Gire to delve deeper into the capabilities of blood-based diagnostics. Using Illumina’s resources, they examined RNA in blood samples to see how gene expression changes over time during the menstrual cycle. “We saw an explosion of differentially regulated genes that correlated to known hormonal shifts in the menstrual cycle,” said Gire. The research provided further validation that menstrual blood could be the sample of choice for tracking reproductive health conditions.

They’re now focusing on detecting endometriosis, a painful condition affecting about one in 10 American women.

In December, NextGen Jane was accepted into the selective Illumina Accelerator, a program that is providing the company with additional funding through Viking Global, as well as research support, lab space, and access to sequencing technologies. Moreover, at the end of February, NextGen Jane reached a major funding milestone with investments led by Access Industries, the privately held investment company owned by Len Blavatnik, M.B.A. ’89, for whom the Blavatnik Biomedical Accelerator and the Blavatnik Fellowship are named.

This spring, Tariyal and Gire are collaborating with a leading endometriosis clinic to conduct a clinical trial using donated samples. (They are seeking healthy female volunteers in the Bay Area for participation.) “You can be part of our trial, and it’s as simple as giving us a tampon,” Tariyal said. “Something that you would otherwise throw away can actually push science further.”

“NextGen Jane is a strong example of what can happen when young entrepreneurs connect with science in a fertile environment,” said Sato. “The Blavatnik Fellowship program at HBS incubates both the leaders and the life-science enterprises of the future. Science-based businesses can be transformative, but they present some of the toughest business challenges. Ridhi’s drive, persistence, and vision exemplify what it takes.”

As the company takes shape, Tariyal and Gire have become adept at navigating uncharted territory, with the same determination that carried them through their earliest travails together.

“We wouldn’t be here without the vast support from Harvard and the mentors who pushed us forward despite the odds,” said Tariyal. “We’re looking to start a revolution in women’s health, and we’re betting on women being smart as hell, really savvy, and knowing how to manage this stuff.”