In mind and heart, never far from home 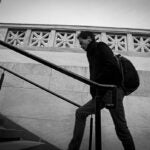 Chiaroscuro: Exploring the dark and the light

On the afternoon she submitted her senior thesis, Andrea Ortiz ’16 went down to the Charles River. There she was, a girl born in Mexico City, raised as an immigrant in Miami, a star in her family for making it to Harvard. Yet she felt a wave of sadness, and that, she reasoned, made no sense. So she sat by the river to think until it came to her: This was yearning.

“You never accomplish anything alone,” she said later. “I was feeling the absence of the people who were most influential in getting me to this point. I wished they could be here too.”

Her grandmother, Socorro Roman de Escandon, is one of those people. She is a woman who created her own philosophy and humanities class in Mexico City for people like herself, without access to a college education. Later in rural Comitán de Dominguez, where Ortiz spent childhood summers, her grandmother mail-ordered hundreds of books. The family home became an informal library for rural housewives.

As a child, Ortiz listened raptly as her grandmother told stories about Princesa Mariposa, the butterfly princess. In this homespun version of the Greek myth, a human girl, Psyche, outsmarts the gods, defies great obstacles, escapes the underworld, acquires wings, and is free like the butterfly: a symbol of the soul. It was one in a long line of lessons on female empowerment.

“Everything I do at Harvard is in some ways for my grandmother,” said Ortiz. “She did not have these opportunities but she wanted them for me.”

For as long as she can remember, Ortiz has straddled two worlds: a family world that unfolds in Spanish and a public one that does not; one in which she is an American citizen who has a driver’s license and the right to attend college, and another in which her undocumented friends do not; one in which privilege, even if hard-earned, has led to Harvard and a world of connections — and another inhabited by relatives in Comitán de Dominguez, where people marry young, raise cattle, and often never leave.

By the river, Ortiz, who will soon graduate with a bachelor’s of arts in social studies, thought about all of this — and how she had produced a deeply felt thesis of 120 pages, a political sociology study, and grown attached to it. “One of the most beautiful things about writing my thesis was realizing, afterward, why I wrote it. It is the story of my family in a lot of ways.”

In it, Ortiz analyzes what works, and what could work better, when Mexican immigrants in the United States organize and fund projects intended to improve the quality of life back home. With a research grant from the Weatherhead Center for International Affairs, she lived last summer in Zacatecas, in northern Mexico. She interviewed people in three rural towns, and came to understand how they handled support from abroad — or sometimes, due to corruption and inefficient governance, failed to. At heart, it is a paper about giving back, and how best to do that.

“People don’t just leave and forget about home. Immigrants want to help those they left behind. That really matters to them,” she said.

While at Harvard, Ortiz chose to give back. She was deeply involved in community-service programs at the Phillips Brooks House Association, which she now describes as a second home. As part of the Athena Program for gender empowerment, she mentored a Nigerian teenager. As part of the Boston Refugee Youth Enrichment Program, she taught immigrant children in Dorchester to speak English and navigate some of the things that had puzzled her as a newcomer to the United States: sports references, inane metaphors, and how to make a Thanksgiving dinner.

Academically, she has focused on political economy and development in Latin America. She intends to build a career that enables her to address issues of poverty, education, immigration, and crime in low-income communities in the U.S. She recently received a Fulbright-Garcia Robles award, which will allow her return to Mexico to do research on migration.“I’m driven partly by the feeling that I’ve been lucky enough to have a foot in both worlds when other immigrants in this country don’t,” she said.

On the day Ortiz finished her thesis, she called to share the news with her 72-year-old grandmother in Comitán de Dominguez, who will visit Boston for the first time in May. She is thrilled to attend her granddaughter’s Harvard graduation but, before that, straight away, she wants to walk inside Widener Library and take a good look at its 3.5 million books.