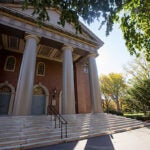 The title of a new, student-led public art installation, created in response to the results of the Association of American Universities-led sexual conduct survey distributed to every degree-seeking student at Harvard last spring, asks: “Where Do We Go From Here?”

It’s a question co-creators Delfina Martinez-Pandiani and Devon Guinn were asking in the months following the September release of survey data from Harvard and other participating universities. Both undergraduates believe the critical word in the question is “we.”

“In a small degree the sense of community got stronger from this,” said Martinez-Pandiani, a junior concentrating in human evolutionary biology with a secondary study of women and gender studies. “The process has been what it’s been about, but it’s the end product — when the installation goes into the residential Houses and then on public display in Tercentenary Theatre — that will be really exciting. It’s not going to be complete until the community engages with it.”

“Where Do We Go From Here?”— a structure of 14 three-sided columns made of Plexiglas and aluminum — went into all 12 of the College’s undergraduate Houses, the graduate students’ Dudley House, and Ticknor Lounge in Boylston Hall, where it can be viewed by freshmen.

Students are encouraged to engage with the art on a personal level, writing thoughts on the Plexiglas with the markers provided or dropping sealed, private notes into a slot on one of the sides. Attached to each column are excerpts of the Westat report and the community messages from Harvard President Drew Faust and Danoff Dean of Harvard College Rakesh Khurana, as well as mirrored stickers that enhance the idea of reflection. Yellow highlighter draws the eye to statistics and quotes from the report, such as Khurana’s “This is a problem that no one group or tactic can sufficiently address; it will require all our collective efforts.” Orange marker focuses repeatedly on the word “community.”

“The emotional weight of the subject is enormous. This is a terrible issue and it’s happening here and on campuses across the country. The students feel a responsibility to their peers — to create something that is artistically worthy, but also deeply sensitive to all that is in play here. They see their work as part of a process that the community must undertake to exchange ideas, to process, and to ask what each of us must do to make change,” said Jack Megan, director of the Office for the Arts.

He described Guinn and Martinez-Pandiani as “gems,” students whose compassion and wisdom created art that “contributes to the healing process.”

Guinn, a junior concentrating in visual and environmental studies, said he didn’t want “Where Do We Go From Here?” to seem like “a mandate.”

Impetus for the project, which was created with the help of a larger group of students, came out of an Office for the Arts meeting held in response to the survey. Martinez-Pandiani described her gut reaction to hearing in that meeting that “[among] bystanders, a total of 79.8 percent indicated that they did nothing.”

“The fact that almost four-fifths of the respondents were present in a situation where help might have been needed was angering,” she said. “In these meetings we started talking about the interconnectedness.”

While in the Houses, the 6-foot structures will be monitored daily for potential defacement. Guinn and Martinez-Pandiani will seek advice from the Office for Sexual Assault Prevention and Response, the Title IX Office, and the Office of BGLTQ Student Life to discuss next steps should any hurtful messages appear on the installation.

“We (as students) are trying to do this project as best we can, but we’re not trying to pretend to be experts. If we don’t know if we should take something off, we will. We don’t want this art installation to become divisive,” said Guinn.

The project was as ambitious physically as it was emotionally, so the students teamed up with Ross Miller ’77, an artist based in Allston. Miller served as technical adviser, helping give the concept a physical form. “I have a big space with lots of materials. We made little models, and a very rough mock up of a 3-D object that could have surfaces to write on. Early versions had exposed bolts and rough edges, but what became clear is that the report and clear spaces were more important,” Miller said. “It’s a clean, elegant minimalist form, but it’s about the content, not the form.”

The structure will spend two weeks in the Houses, then be brought into Tercentenary Theatre April 25 for Arts FIRST, the annual spring festival that runs through May 1. After Arts FIRST, “Where Do We Go From Here?” will come down and private notes inside the structures will be destroyed to protect students’ and community members’ privacy.