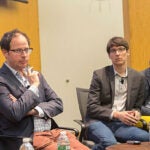 The puzzles for pollsters

When Deborah Alejandra Popowski, J.D.’08, was just beginning her studies at Harvard Law School (HLS), she learned a powerful lesson about the value and import of the law.

An American attorney representing a Guantanamo detainee spoke at an HLS event. The lawyer told of her client, a Saudi citizen in his early 20s, and of the regimen of inhuman treatment that he endured at the hands of U.S. military forces. For Popowski, the lawyer’s testimony brought home the human dimension of torture.

“Everybody in law school was talking about concepts and the rule of law regarding torture,” Popowski said. “That was the first time that I had ever heard somebody talking about people.”

Ever since, she has tried to follow that example and tend the people.

Since 2009, when Popowski began working as a fellow at the HLS International Human Rights Clinic, she has advocated for torture survivors as part of a movement to seek accountability for U.S. torture through both state and international courts.

Popowski, who became an HLS clinical instructor in 2011, has focused on the role that psychologists played in the U.S. torture program authorized by the Bush administration and implemented as part of its “war on terror.”

Popowski recalled an internal military report that documented an interrogation session in which a detainee was repeatedly slammed onto the floor and ended up spitting up blood, with a loose tooth, bruises, and rib pain.

“The psychiatrist who was present didn’t say, ‘You shouldn’t be slamming him at all.’ He recommended the slamming,” said Popowski. His “protection” of the man, she said, was to tell the interrogator to move chairs out of the way before slamming him again.

Examining the controversial participation of psychologists in the U.S. torture program, Popowski will take part in a panel on Wednesday with David Luban of Georgetown University Law Center.

Widespread public criticism of the American Psychological Association (APA) for endorsing the U.S. program led the group last summer to prohibit its members from taking part in interrogations by military or intelligence services. Shortly afterward, the Pentagon announced the withdrawal of psychologists from Guantanamo Bay.

For Popowski, both decisions are reasons to celebrate because they represent a landmark in the movement for reform and prevention within the association, whose call is to heal and do no harm.

An independent report last year commissioned by the APA concluded that the association had colluded with the Department of Defense inappropriately by aligning its ethics policies with military directives to protect the role of psychologists during interrogations they had reason to know were abusive. According to Popowski, this collusion enabled torture and cruel, inhuman, or degrading treatment in violation of human rights and humanitarian law.

Although the report validated Popowski’s position, she still worries about what she calls the U.S. government’s unwillingness to hold accountable the military and civilian officials who were responsible for the program. She represented a group of Ohio residents — including psychologists, lawyers, a minister, and a veteran — who filed a complaint with that state’s licensing board against Dr. Larry James for his role in Guantanamo. Other advocates  presented evidence relating to Dr. James and other psychologists, alleging their involvement in torture, to licensing boards in Texas, New York, Louisiana, and Alabama.

In no case did a state board bring formal charges. Popowski said they offered “opaque, implausible, or seemingly pretextual justifications for their decisions” and “seemed to turn a blind eye” to credible evidence. All this, she said, highlights the lack of accountability for those who designed and implemented policies condoning torture. So for Popowski, the struggle is not over.

In her HLS classes and clinic, Popowski strives to teach students the effects of the legal practice on people’s lives, an aspect that she believes is somewhat overlooked in law schools across the country. As part of the International Human Rights Clinic, she took students to Geneva, where they, along with Trudy Bond, a psychologist from Toledo, Ohio, presented the UN Committee Against Torture with the 2014 shadow report that they helped write. The committee concluded that the U.S. government should investigate senior officials, lawyers and other civilians responsible for their role in the program.

Students also participated in litigation and in other advocacy work that accompanied the legal action.

“We want lawyers and advocates who are compassionate and empathetic people,” she said. “They have to be able to understand the tremendous impact their policies, rules, and actions can have on people. It’s an ethical question students have to wrestle with — what responsibilities they have as lawyers.”

Popowski feels optimistic about the future.

A granddaughter of Holocaust survivors, Popowski was born in Argentina during a military dictatorship. She likes to tell her students that in 1999, when she was writing her bachelor’s thesis on collective memory in Argentina, prospects for justice in cases of torture and human rights violations committed by the military junta were dim. Nearly a decade later, when she came back to HLS, Argentina had become an example of accountability for crimes of torture and forced disappearance.

“That’s the way I like to think about this work,” she said. “You have to be ready to challenge your concept of what’s possible and have a long-term imagination.”

“American Torture, Institutional Corruption: Psychology, Law, and the Power of Professional Complicity and Resistance” is sponsored by HLS Advocates for Human Rights. It will be held on Wednesday from noon to 1 p.m. at Wasserstein Hall 1015.