‘Humanity’ through a telephone by way of a telescope 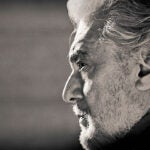 A large-scale, audio-video installation about the fragility of human life can be hard to watch. And the artists behind the event designed it that way.

Shot on a smartphone through a handheld telescope, the images of post-Fukushima Japan — workers cleaning up radiation, a policeman on his beat — are fragile and unsteady, collapsing and disappearing almost as quickly as they appear. The video is paired with four separate channels of sound (water, street noise from Japanese films) that add to the anxiety-inducing sensibility.

“The experience of watching the piece is estranging,” said Lucien Castaing-Taylor, professor of visual arts and director of the Sensory Ethnography Lab and the Film Study Center, one of the three creators of “Ah humanity!”

“Even though we have these herculean Olympian powers, we’re still utterly depending on nature and in its thrall,” he added.

Using the 2011 nuclear plant disaster as a starting point, the artists filmed all over the Japan, including Tokyo and Sendai. In Fukushima, filmmakers captured radiation removal as well as post-apocalyptic imagery of a car siting in the living room of an abandoned house. The resulting 23-minute video is mixed with Karel’s four prongs of sound and played through four speakers set up in different corners of the Science Center Plaza.

The film will be projected on the side of the plaza on a looping cycle every night through Saturday, starting at 8 p.m., courtesy of the Harvard University Committee on the Arts. On Wednesday, there will be a roundtable discussion about the installation from 6 to 7:30 p.m. in the CGIS South Building.

“We’re so used to our visual experiences dominating our daily life. It’s harder to categorize the world into sound. You can control your eyes by closing them. You can’t close your ears,” said Castaing-Taylor.

“Ah humanity!” takes its name from the last words of the Herman Melville story “Bartleby, the Scrivener: A Story of Wall Street.” It was originally a commission for Paravel from F93, a French Centre for Scientific, Technical and Industrial Culture, in 2011.

Karel, who will mix the audio live on the plaza, will use sound selections largely from a half-dozen classic Japanese films, including “Black Rain” (about 1950s Hiroshima) and “Virus” (a post-apocalyptic sci-fi movie), as well as a simulated earthquake and footage the artists shot in Japan.

“I wasn’t looking for the characteristic action sounds. I was looking for the sound between events, such as speech or music, the background textures when almost nothing is happening. That was the guideline, and sometimes smaller or bigger sounds come through. The result is a pretty disjunctive sound field,” Karel said.

“It’s not just about Japan. The situation appears dire, and the anxiety is not unfounded,” Karel said. “What you see in the footage gives, simultaneously, a feel of intimacy and distance. You’re removed and also a little too close.”

“Ah humanity!” was made with support from F93 in Paris, the Reischauer Institute of Japanese Studies, Digital Arts and Humanities, and the Harvard University Asia Center. It was produced in the Sensory Ethnography Lab.

The panel about the installation will be held in the Belfer Case Study Room, Japan Friends of Harvard Concourse, CGIS. Moderated by Theodore C. Bestor, Reischauer Institute Professor of Social Anthropology and director of the Reischauer Institute of Japanese Studies, the panel will include Yukio Lippit, professor of history of art and architecture and Johnson-Kulukundis Family Faculty Director of the Arts at the Radcliffe Institute for Advanced Study; Karen L. Thornber, professor of comparative literature and East Asian languages and civilizations; and Reiko Yamada, composer, sound artist, and fellow at the Radcliffe Institute.