Finding her place by helping 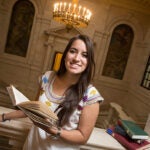 In mind and heart, never far from home

Like many first-year college students who have to wrestle with new surroundings and expectations while handling feelings of loneliness and isolation, Jing Qiu ’16 at first couldn’t help but feel lost.

It wasn’t until the summer after her freshman year, when she spent seven weeks teaching math and reading skills to elementary school students in Cambridge’s lower-income neighborhoods, that Qiu found herself.

“I learned so much about myself, about others and the world around me,” Qiu said on a recent morning at the Phillips Brooks House Association (PBHA), Harvard’s umbrella organization for more than 80 social service programs that draw 1,500 student volunteers a year.

After her first experience at PBHA, Qiu stayed connected and never looked back. She went on to volunteer in Cambridge Youth Afterschool, where Harvard students tutor elementary students with homework and teach math and reading skills, and in Leaders!, where students mentor teens to gain leadership skills and help them as they explore paths to college.

For the past three summers, she has taken part in Cambridge Youth Enrichment, leading students in science and cultural workshops and camping trips. For most of her free time over the past four years, she has worked in PBHA’s social service programs. She also interned at the Breakthrough Collaborative and the Boston Collegiate Charter School.

Qiu was awarded a Presidential Public Service Fellowship in 2014. In her junior year, she became PBHA vice president, and she stepped into the presidency in her senior year.

An economics concentrator, she had originally thought of working as a consultant. Now she plans to pursue a career in nonprofit work.

Students who volunteer with any program within the association have to commit to eight hours of service per week. The challenge is balancing schoolwork and extracurricular activities, but for Qiu, choosing between studying for a midterm or working at PBHA was always a no-brainer.

“We have an inside joke that PBHA is the best class you can take at Harvard,” said Qiu. “It’s definitely true. I learned a lot from my classes. But what I learned at PBHA, dealing with people, working with others, and leading people, was more fulfilling, and it’s knowledge I can apply anywhere.”

After she graduates, she will be a Harvard Teacher Fellow at the Harvard Graduate School of Education.

The child of Chinese activists who left China in the wake of the Tiananmen Square protests and who settled in St. Louis, Mo., Qiu views public service as a social responsibility because, she said, it’s everybody’s job to reduce the gap between the haves and the have-nots.

“Many times, you leave with more questions than answers,” she said of her volunteer work. “Why does this program have to exist? Why don’t these children have access to programs that their peers have access to? You’re overcome by the sense that there’s injustice in the world, and the question is how do you grapple with these issues without feeling despair?”

At PBHA, Qiu found a community of like-minded people who offered support when she felt her own despair and made her feel empowered to do more.

Growing up in St. Louis, she felt part of the “privileged poor,” a term coined by Harvard sociologist Anthony Jack that refers to low-income students who attend private schools, often on scholarships. On her mother’s employer’s recommendation, Qiu attended a private elementary school and high school on full financial aid. As a first-generation college student, she was also awarded full financial aid at Harvard.

Now, Qiu would like to remind incoming freshmen that community service is not only an extracurricular activity, it’s a pursuit that could lead to new career paths.

“Public service is an integral part of your college experience,” she said. “It not only makes you a better person, but it also makes you think a lot about who you are and where your place is in the world.”