Election of Harvard faculty to American Academy of Arts and Sciences 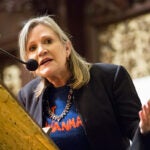 Members will be inducted at a ceremony on Oct. 8 in Cambridge

The American Academy of Arts and Sciences today announced the election of 213 new members. They include some of the world’s most accomplished scholars, scientists, writers, artists, and civic, business, and philanthropic leaders.

Founded in 1780, the American Academy of Arts and Sciences is one of the nation’s most prestigious honorary societies. The American Academy is also a leading center for independent policy research. Members contribute to academy publications and studies of science and technology policy, global security and international affairs, social policy and American institutions, and the humanities, arts, and education.

“In a tradition reaching back to the earliest days of our nation, the honor of election to the American Academy is also a call to service,” said Academy President Jonathan F. Fanton. “Through our projects, publications, and events, the Academy provides members with opportunities to make common cause with one another. We invite these newly elected members to participate in this important and rewarding work — and to help produce the useful knowledge for which the Academy’s 1780 charter calls.”

Read about the members.