Changing your body, from the top down 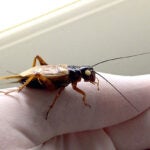 Launch Lab anti-obesity startup focus is ‘battle between the ears’

It was the “head thing” that seemed like window dressing to Madeline Meehan, the Harvard Innovation Labs operations director who wanted to lose a few pounds.

In the end, she says it was the “head thing” that made her a believer.

“I thought it was all about the weight, but it’s really not,” Meehan said. “It’s about screwing your head on in a different direction.”

Over 16 weeks this past fall, Meehan put herself at the mercy of a Harvard Launch Lab startup, Gain Life, and found the pounds coming off. By the time the program wrapped up in February, she had lost 30 pounds.

Not bad results from a casual conversation.

Meehan was walking past Sean Eldridge, a Harvard Business School graduate and one of Gain Life’s co-founders, when he called Meehan over to ask what she thought of the name PowerUp for the company’s weight-loss program for women.

Next thing Meehan knew, she was enrolled in the first PowerUp cohort, engaging digitally with a coach and a group of fellow wannabe weight losers. Over the coming weeks, Meehan changed her diet and exercise habits, but also fought what Eldridge calls “the battle between the ears” — seeking an internal shift that Eldridge says is key in successful weight loss and an important element in Gain Life’s programs.

The casual encounter that led Meehan to Eldridge was accidental, but not entirely by accident. The Launch Lab is designed to encourage interaction between the roughly two dozen startup companies manning 130 desks cheek-by-jowl in two large, adjoining open spaces.

Not quite two years old, the Launch Lab is part of a growing culture of entrepreneurship fostered at the Harvard Innovation Lab across the street, which offer space, networking, expert advice from “entrepreneurs in residence,” and other support to student entrepreneurs.

The University-wide entrepreneurial nexus is about to grow bigger, with the planned addition of the Life Lab, 15,000 square feet of laboratory space for biomedical or biotech startups, which make up a significant proportion of the startup population, Meehan said.

Eldridge and Ian Richardson, who joined Gain Life in September, said the Launch Lab environment is supportive, naturally collegial, and fertile ground for a startup. The “pay-it-forward” ethos means that those starting out can seek advice from those in older companies. Gain Life, for example, can offer experience-based advice in product development and deployment, but will look to others when it comes to securing external funding, a step it has yet to take.

“From an outsider’s perspective, the ecosystem that’s been built here is second to none,” said Richardson, a graduate of Furman University in South Carolina. “The idea that you can kind of have these EIRs [entrepreneurs-in-residence], these mentors, help you start something from nothing is not something you see all over the country. This is very much a unique thing.

Gain Life is seeking a foothold in a marketplace crowded with fad diets, diet books, weight-loss programs, and not a few wild claims of success. Eldridge thinks he and co-founder John Peters — a nutrition expert he met while working at Procter & Gamble after leaving HBS — have found something that both sets the company apart and works for most of their clients.

Peters’ research into people who had lost a lot of weight and kept it off — an average of 70 pounds for six years — revealed the importance of the mental component, Eldridge said. Though there were practices in common — such as exercising for 150 minutes a week — what was most important was an identity change: They recognized their post-weight-loss selves as different people, and had developed a new mindset about themselves, food, and exercise.

“You have to blog every day,” Meehan said of her own experience, “and at first I wasn’t blogging every day because you have to write how you feel. And I thought again, ‘Is this crazy? But I’ll do it because I like these guys.’ I was doing it more to help the startup and then the more I got into it I was like, ‘Wow, this is working.’”

The company recently concluded an 18-month research-and-development phase that tested their programs tailored to men and women. The 16-week programs begin with an in-depth consultation with a coach who probes the deeper reasons behind the desire for weight loss, Eldridge said. The answers inform both coach and client and help align the program’s goals to the client’s broader life aims.

For example, Eldridge said, a middle-aged man may want to lose 40 pounds and, when asked why, he might say to look better and get back into shape. Asked why he wants to get back into shape, he might reveal that he wants to be alive for his young daughter’s wedding day. When asked why the wedding is important, he might respond that his own father developed diabetes, and, when asked about that, he might reveal that the diabetes began a cascade of health ills and, ultimately, he doesn’t want his own poor health to be a burden on his children.

Of those who’ve gone through the programs, 80 to 85 percent complete the course, according to company statistics. After a year, men lost an average of 14 percent of body weight and women 12 percent, both better than the 5 percent Richardson said is considered the industry “gold standard.”

The company is looking to expand in the next year and is targeting both the consumer and corporate markets, Eldridge said. He wants the number of clients to grow to 10,000 and expects the 25-person staff — most of whom are coaches who work from various locations — to more than double.

That means the company will be embarking on a personnel search, but it doesn’t mean it’s quite ready to leave the friendly confines of the Launch Lab, with its easy access to i-lab resources, professors with whom Eldridge studied as a student, and even the restaurants he visited then.

“It definitely makes me feel like I’m more tied to the University … because it’s continuing to give so much to me,” Eldridge said. “We’re in no rush to get out of here.”