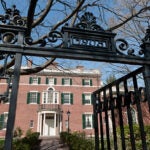 The workings of the Overseers

Carrie Fisher is best known as Princess Leia in the “Star Wars” saga, but the actress, author, and screenwriter is also a master of the one-liner, especially as a device to address her own battles with addiction and bipolar disorder.

“I’ve never been ashamed of my mental illness; it never occurred to me,” she told an audience of several hundred people at Harvard’s Memorial Church Monday evening. “Many people thank me for talking about it, and mothers can tell their kids when they are upset with the diagnosis that Princess Leia is bipolar too.”

Fisher was honored Monday with an Outstanding Lifetime Achievement Award in Cultural Humanism by the Humanist Hub and the Harvard Community of Humanists, Atheists, and Agnostics. This is the 10th year for the event and past recipients of the award include former U.S. Rep. Barney Frank, comedian Eddie Izzard, author Mary Roach, and entertainer Seth MacFarlane.

Fisher, 59, was escorted into the Memorial Church sanctuary by a cast of costumed “Star Wars” characters including Han Solo, Chewbacca, Princess Leia, and a small platoon of storm troopers. The Harvard Pops Orchestra played the iconic theme music from the epic sci-fi film series as a tribute to Fisher’s work.

“This is as close to a college education as I will ever get,” she said after receiving the award. “I want to thank you for playing the music from ‘Star Wars,’ and I was really worried that you were not going to play my theme. Not many people have a theme, but I do.”

Princess Leia may be her most beloved role as an actress, but it is Fisher’s roles as an author and screenwriter that have touched the lives of many people living with addiction and bipolar disorder. She wrote about her struggles in her books “Postcards from the Edge” and “Wishful Drinking.”

Fisher’s trials with the mental disorder were also featured in an Emmy Award-winning BBC documentary called “The Secret Life of the Manic Depressive.”

Sarah Chandonnet, a 2009 Harvard Divinity School graduate and program director of the Humanist Hub, said Fisher was nominated in part because of her efforts to destigmatize mental illness.

“To me, Carrie has always been the indestructible Princess Leia,” Chandonnet said. “But in that documentary I learned that she is so much more than that. She is a compassionate, funny, deeply flawed, deeply brave, slightly inappropriate, big-hearted, bipolar human.”

Ditching her notes early in the speech, Fisher spoke openly about her battles with addiction and the emotional swings of bipolar disorder. Symptoms of the mental illness appeared when she was in her teens, she said. But Fisher was not diagnosed as bipolar until she became clean and sober.

“I don’t call it bipolar because manic-depressive sounds like what happens to me. I was diagnosed a year after sobriety, but I did not believe it,” Fisher said. “I came out of rehab with some other folks … But as the year went on they all seemed to [get better] and I did not. I was so excited because I thought I was an alcoholic and that would explain what was the matter with me, but it didn’t.”

Learning to cope with bipolar disorder takes a sense of humor, perspective, medication, and the ability to tap into a community of people with the illness for information and support, Fisher said. People who suffer from  mental illness should not be afraid to seek the help they need, she said.

“I like to remind myself that I am self-medicated, dessert and food obsessive-compulsive, overly talkative … with no formal education,” Fisher said. “I think it’s OK to say, if some of you find out [you are bipolar], that Princess Leia is bipolar, too. It seems to relax people.”