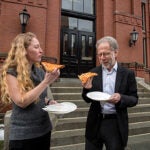 As climate change rolls out, French grape growers get a boost, but it may prove illusory, study says

A word of advice, oenophiles. Start stocking up now.

In recent years, French vintners have produced a number of exceptional vintages, and Elizabeth Wolkovich, assistant professor of organismic and evolutionary biology, says that climate change is part of the reason why. As climate change continues to drive temperatures higher, however, that recent winning streak could soon come to an end.

By examining more than 500 years of harvest records, Wolkovich and researchers from NASA found that wine grape harvests across France, on average, now occur two weeks earlier than in the past, largely because of climate change pushing temperatures higher without the aid of drought. While earlier harvests are normally associated with higher quality wines, researchers caution the trend likely won’t last forever. The study is described in a March 21 paper in Nature Climate Change.

“There are two big points in this paper. The first is that harvest dates are getting much earlier, and all the evidence points to it being linked to climate change,” Wolkovich said. “Especially since 1980, when we see a major turning point for temperatures in the Northern Hemisphere, we see harvest dates across France getting earlier and earlier.

“The bad news is that if we keep warming the globe, we will reach a tipping point,” she continued. “The trend, in general, is that earlier harvests lead to higher-quality wine, but you can connect the dots here … We have several data points that tell us there is a threshold we will probably cross in the future where higher temperatures will not produce higher quality.”

“It’s become so warm thanks to climate change, grape growers don’t need drought to get these very warm temperatures,” said Benjamin Cook, the lead author and a climate scientist from Columbia University’s Lamont-Doherty Earth Observatory and NASA’s Goddard Institute for Space Studies. “After 1980, the drought signal effectively disappears. That means there’s been a fundamental shift in the large-scale climate under which other, local factors operate.”

As a measure of how close that threshold may be, Wolkovich pointed toward 2003.

That summer, she said, the continent suffered through a massive heat wave marked by record temperatures that led to many deaths. Yet despite producing the earliest harvest in the study, the wines produced were of mixed quality.

Importantly, Wolkovich noted, the study is not an examination of a single vineyard, or even a single wine-growing region.

“One of the strengths of this paper is that it covers all of France,” she said. “These records come from … Burgundy, Bordeaux, Loire, and even from Switzerland, so we’re looking at an aggregate of many data sets that are put together to get one picture of how a large region is changing.”

What the study can’t address is what may be taking place in any single, specific vineyard.

“If you are on a certain slope with a certain soil type in Bordeaux, you will see a slightly different response than if you were on a wet soil in Burgundy,” Wolkovich said. “So there is a lot of local climate that matters to when you harvest your grapes, and especially what kind of quality you get, and this type of analysis is not targeted to answering those questions about local climate.”

It’s the connection between grape and the climate — what vintners call terroir — that makes wine creation one of the most ideal proxies for examining climate change.

“At the heart of a good wine is climate,” Wolkovich said. “So [the grapes] are a very good canary in the coal mine … and that’s something you see in this paper, which is that temperature is the biggest driver on when you harvest wine grapes.

“You want to harvest when the grapes are perfectly ripe, when they’ve had enough time to accumulate just the right balance between acid and sugar,” she continued. “For much of France, there have been times when it’s difficult to get the exact harvest date growers want because the climate wasn’t warm enough that year… but climate change means the grapes are maturing faster.”

Even if the issues weren’t so tightly intertwined, wine grape records would still be invaluable.

“These are some of the longest human records we have where people are actually writing down data year after year,” Wolkovich said. “Originally, it was the church that was keeping track of these records … so our data goes back to 1300, but our analysis starts at 1600.”

Most climate records, Wolkovich said, cover much less than a century — after climate change had already begun — making it difficult to gain insight into how the climate system functioned in the past.

“This study was possible because of the tremendous harvest records and multicentury-long records of temperature, precipitation, and soil moisture reconstructed from historical documents and tree rings,” Cook said. “We can now use this data to ask questions about whether what we understand from a record of the last 30 years is actually representative of what that system was doing 100 or 200 or, in this case, 400 years ago.”

The trend that emerged when researchers began to examine that record, Wolkovich said, showed that even modest increases in temperature can result in earlier harvests.

“We are looking at climate change that, on average, has warmed globally about 0.6 degrees Celsius,” she said. “But as we go forward, with projections of 2 or more degrees of additional warming, we could be talking about significantly earlier harvests.”

Ultimately, Wolkovich believes, the study’s findings should serve as a lesson for how real — and immediate — climate change’s effects are.

“Grapes have allowed us, because of their long-term record, to see that we have fundamentally shifted the climate system through our actions,” Wolkovich said. “We have made these extremely hot summers in Europe no longer hot and dry, but now hot and possibly humid, which is dangerous for people. But as we can see from these long-term records, there are other, cascading consequences for wine grapes as well.”