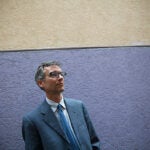 Stephen Greenblatt, the John Cogan University Professor of the Humanities, has won the 2016 Holberg Prize for his extraordinary body of writing and its profound impact on humanities scholarship.

The honor, awarded by the Norwegian government in the fields of arts and humanities, social sciences, law, and theology, recognizes Greenblatt as “one of the most distinctive and influential voices in the humanities for four decades,” said Pratap Bhanu Mehta, chair of the Holberg Academic Committee.

“His work has had immeasurable impact on the practices of history, literary studies, and cultural criticism, well beyond his own specialist area,” Mehta said in Greenblatt’s citation. “He has provided us a vocabulary through which we can approach the task of understanding our times and its history. He has fashioned new methods by which the relationship between the word and the world, the text and the context can be understood.”

Greenblatt, who joined the Harvard faculty in 1997, won a National Book Award and a Pulitzer Prize for “The Swerve: How the World Became Modern” (2011). His other books include “Will in the World,” “Shakespearean Negotiations,” and “Hamlet in Purgatory.” In addition, he is general editor of both “The Norton Shakespeare” and “The Norton Anthology of English Literature.” Next year he’ll publish “The Rise and Fall of Adam and Eve.”

“International recognition of this magnitude is, of course, thrilling for me,” Greenblatt said. “But I also see the award as recognition of the central importance of literature, and more generally of the human imagination, in all of our lives. Over the past decade or more, confidence in the significance of the humanities has steadily eroded. The Holberg Prize is a powerful signal that the scholarly attempt to understand and transmit our cultural inheritance is, quite literally, immensely valuable.”

Greenblatt is the third American to win the Holberg, which was first awarded in 2003. He will receive a prize of 4.5 million kroner (about $525,000). The ceremony is June 8 at the University of Bergen in Norway.

“Stephen Greenblatt is unquestionably among the two or three most influential literary critics in the world,” said James Simpson, the Donald P. and Katherine B. Loker Professor of English and chair of the English Department. “Through his own immensely influential publications, through the pedagogic texts he edits — e.g. ‘The Norton Anthology of English Literature’ — and through the influence of his scholarship, Greenblattian curiosity, wonder, and pleasure have reached every university and school classroom in the United States, not to speak of many other countries in which these texts are authoritative.”