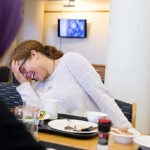 A freshman considers the lessons of winter break

There is no shortage of words starting with “re-” that can describe what winter break and Wintersession are meant to achieve. Despite the fact that alliteration makes anything sound more dramatic than it is (cue the title of this piece), the most commonly used descriptions are quite true. In contrast to the semester in full swing, the free time and significant gaps between appointments that mark Wintersession give us ample opportunities to rediscover who we were before Harvard, how it has changed us, and who we are today.

And winter break, whether spent launching the next Facebook, skiing overseas, or watching Netflix in bed at home, is a great time to step back from an extremely fulfilling, but also sometimes overwhelming and hectic semester.

As a freshman, and especially as an international student who had never spent anything other than short visits in the United States, I relished the time I spent away from Harvard. It was eye-opening to step back and cast off some of the pressures, expectations, and stress surrounding GPAs, internships, and even social life that inevitably mount as we study with highly accomplished people.

After a short break, coming back to campus was surreal. Part of the strangeness came from realizing that Harvard actually feels like a second home now ― it is “getting back to Harvard” instead of “going to Harvard.” Campus was not too quiet for the most part, and many people were back as early as Jan. 15, working on various pursuits. I heard tales of practical workshops such as how to manage personal finances, new experiences like taking up kendo, and even intensive academic experiences like a case-study workshop at Harvard Business School. As for me and 50 other freshmen, we chose to take part in the Refresh Retreat.

The retreat originated as a psychology concentrator’s senior thesis project, and was then adopted by the College. Dean Madeleine Currie of Oak Yard, Paul “Coz” Teplitz of the Freshman Dean’s Office, and 10 upperclassmen facilitators brought us freshman to Hulbert Outdoor Center in Vermont, where we frolicked in the snow, stayed in warm rustic cabins, and pondered the meaning of life. What I found most rewarding was the opportunity to get out in the countryside and reflect in a group setting.

I had never visited Vermont in my life, nor really seen any decent snow, so stepping out of Greater Boston was a magical experience. I and the others immersed ourselves in a winter wonderland of completely frozen lakes, pristine snow, icy meandering creeks, and dazzling night skies. During the several hours of free time we had each day, we sledded along the slopes, sang songs from “Frozen” as we built snowmen, tried to perform gymnastic tricks on slides, and had roasted s’mores with hot chocolate. The unique setting and the special experiences helped me forge friendships with people I had never and would never have met otherwise. Beyond friendships, the setting also contributed significantly to our reflection. I consider myself a fairly reflective person, and I enjoy taking time during each day, or each week, perhaps during the shower or while I’m at the gym, to think about what I have been doing and how I want to go forward. Yet there is something about taking yourself away from your usual physical environment that opens up the mind in new ways. While skating (and trying not to fall) along the plowed paths of Lake Morey, I found myself reflecting on the past semester, how far I’ve come and how far I still need to go, and reaching depths and new insights like I never had before.

I was able to reflect so deeply in part due to my facilitators and the wonderful sessions we had in big and small groups. Our reflections were divided neatly into three themes, one for each day — the past, the present, and the future. Sitting inside a cozy cabin with 10 other faces made us all open up to relative strangers in ways that even surprised ourselves. I, and many others, commented how gratified we were to hear about the struggles the others faced. It is often easy at a place like Harvard to assume that everyone is doing fantastically well and that you are the odd one out struggling with sleep, extracurriculars, or procrastination. There was none of the “Duck Syndrome” here (a term coined at Stanford for the façade of calm that people put on to belie their struggles), as people shared genuine fears like falling GPAs, taking on too much, not taking on enough, and blocking drama (that came up a lot). As freshmen, we also had the opportunity to learn from those who had experienced it all before us; our facilitators gave us great tips, like reading a few pages in an assignment to estimate how long it would take to do the whole section, or writing to-do lists manually to avoid getting distracted by electronics ― both strategies that I am excited to implement as the semester rolls ahead.

If I had to choose one snapshot to represent our collective reflecting experience, it would be when we sat in a circle around a spitting fire on our last night there. We each held flameless candles, which we switched off as we went around the circle and shared our regrets and fears, and lit as we expressed gratitude and aspirations. It was a deeply emotional experience that I believe connected us seemingly disparate individuals in our collective quest to do better and make the most of this wonderful institution.

Heading into the next semester, we all have goals, dreams, and targets. I, for one, have already failed some of mine (looking at you, Annenberg breakfast). But no matter how much you reflect and refresh, you cannot accomplish everything and you won’t be perfect every time. And you know what? That’s completely OK.